Over the past six months, Guy Jansen has worked with Lynden Tank Company, Steven Blankenforth, Blue Star Welding, Maple Leaf Auto and the Lynden truck shop to restore an iconic Milky Way tractor and a set of double 2,800-gallon farm pickup milk tankers dating from the 1950's. The project was completed in time to join more than 700 antique trucks at the American Truck Historical Society Convention in Yakima, WA this spring.

"We plan to use #39 and its tankers #75B and #77B to support the agricultural communities in our service area by providing potable water and a hand-washing station at county fairs, FFA, 4-H, and similar events," said Milky Way President Brad Williamson. He encourages Lynden employees to think of otherways #39 can be used to support Lynden customers.

This 1956 single-ax Kenworth tractor and double single-axle tankers picked up milk at the Whatcom County dairy farms during the period when the industry was transitioning away from truck tanks to semi-trailers. Each single tanker picked up milk locally and was brought back to Lynden where they were trained up as a set of doubles and pulled through the Darigold plant in Lynden, WA to be topped off. They were then hooked to #39 to deliver full loads to Seattle area processors. Hub DeJong drove for Milky Way from 1949 to 1989 and spent many hours in the cab of #39. According to Guy, Hub and his family got a chance to see the restored rig and it brought back many fond memories. 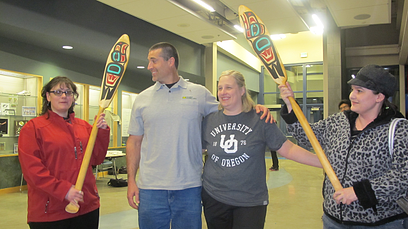 Twenty people in two canoes left Douglas, AK this spring on their way to Wrangell for the rededication of the Chief Shakes Tribal House, a memorable and long-awaited event in the tribal community. Alaska Marine Lines donated the transportation of the canoes from Seattle to Juneau in support of the event and its organizers, the One People Canoe Society (OPCS). The historic tribal house has been undergoing renovation and a special ceremony was held May 4 to rededicate it in the village of Ka’saan on Prince of Wales Island. Canoe teams from other Southeast Alaska communities paddled to Wrangell and on to the island for the two-day celebration.

“Helping the OPCS was especially gratifying because of the scope of their reach. From Seattle to Yakutat, the group unites all communities, big and small, throughout Southeast Alaska in the cultural activity of paddling traditional canoes. Coordinating this shipment also highlighted the importance of our Alaska Marine Lines service within the various communities in Alaska,” says Jake Maenpa, Alaska Marine Trucking Juneau Service Center Manager. 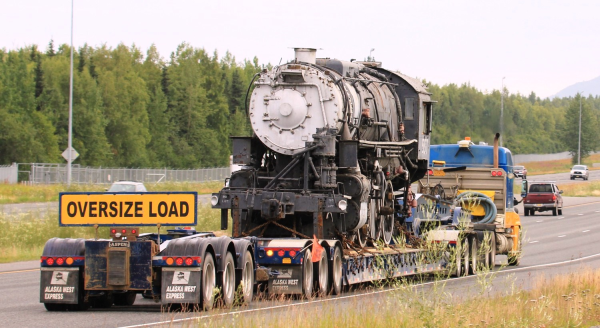 Alaska West Express was trusted with a very important – and heavy – load recently. Driver Kenny Seipel hauled a 150,000-pound steam engine from the Alaska Railroad yard in Anchorage to a Wasilla facility for restoration. Total weight of historic steam engine No. 557, the lowboy trailer and truck: 253,850 pounds. Special permits, pilot cars and trips to the scales were all part of the process. The trip was captured in pictures in the Anchorage Daily News. No. 557 was the last Steam Locomotive in the Alaska Railroad Fleet.  The locomotive was saved from the scrap yard by Monte Holm in Moses Lake, Washington. Monte made 557 the centerpiece of museum. After Monte’s death, Vic and Jim Jansen purchased No. 557 and donated it to the Alaska Railroad. After restoration, No. 557 will be used as a dinner train between Anchorage and Whittier.

Several recent news articles have highlighted Lynden's commitment to and support of Alaska's transportation past. We are proud of our roots and enjoy honoring our employees, past and present.

Old 27, the truck that first carried goods over the Alaska Highway almost 60 years ago, was on display during an event at Lynden Transport's Peger Road facility.

The Jansen brothers and Engine 557 are resurrecting a nostalgic piece of the Last Frontier’s railroad history. Over the next year or more, the historic locomotive will be restored and put back into service, where it will haul passengers between Anchorage and Portage.

Steam Engine 557 on the move (Photos)

Photos of the old steam engine being transported to Wasilla for restoration.

A piece of Alaska railroad history is now back where it belongs. In December, #557, the last operating steam locomotive in the state, made the journey from a museum in Moses Lake, WA to Seattle where it rode an Alaska Marine Lines barge to Whittier. From there it was off-loaded on a flatbed train car to ride the rails to Anchorage (watch the news video) where it now awaits renovation for its next life with the Alaska Railroad. 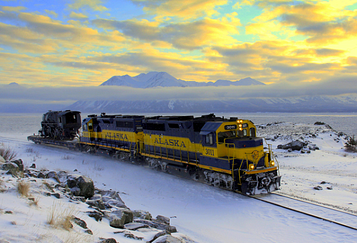 locomotive began in 1944 when it was built for the US Army Transportation Corps and then diverted to Alaska to pull trains for the Alaska Railroad. Old photos show the engine pulling passenger trains from the Anchorage depot to Seward in the 1950s and idling at the roundhouse. It made its last run in 1957 to the state fair in Palmer.

It was finally sold for scrap. Monte Holm, a well-known local and scrap dealer in Moses Lake, WA, purchased the engine from a steel dealer in Everett, WA in 1964. He kept it at his House of Poverty Museum which showcased railroad-related items and was a tribute to his years of riding the rails as a hobo. According to his grandsons, Monte would run the engine through town pulling local residents and even a few visiting dignitaries in an old rail car that was used by Presidents Woodrow Wilson and Harry Truman.

When Monte died in 2006, personal friend Vic Jansen stepped in. Vic and Jim Jansen purchased the engine and decided to donate it to the Alaska Railroad. 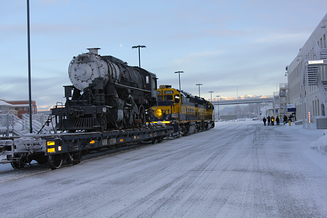 "The best thing about the donation of the engine back to the Alaska Railroad is that it will be put back into service for people to ride and enjoy,” Vice says. The Jansens only request was that the engine be restored and operating within eight years and that Monte's relatives be allowed to ride it for free - forever.

“557 is a significant piece of the Alaska Railroad's history and of Alaska's history as well,” said ARRC President and CEO Chris Aadnesen. "We look forward to working with the volunteers and charitable organizations that will be the front line in getting 557 back on the tracks. It is important to us that we make the wishes of Mr. Holm and the Jansens a reality.”  A plaque will be mounted on the engine honoring Monte's efforts to save it from the salvage yard.