In May, Lynden Chairman Jim Jansen was hon 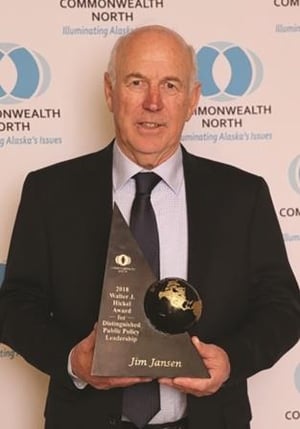 ored with the Walter J. Hickel Award from Commonwealth North, Alaska's non-partisan public policy forum, for distinguished public policy leadership. The award was established in 1999 to recognize the contributions and achievements of individuals who have played a significant role in advancing Alaska's public policy interests. Former recipients include: Walter Hickel, Ted Stevens, John Katz, Willie Hensley and Lisa Murkowski. Jim received the award at a gala event on May 11 at the Anchorage Hilton Hotel Ballroom. Jim is a Navy Seabee with a tour of duty in Vietnam in the 1960s. He has served as an advisory director of Wells Fargo Bank of Alaska, director of National Bank of Alaska, director of the Boy Scouts of America, director of the Resource Development Council and as director of the Nature Conservancy of Alaska. He is also co-chair of the Make Alaska Competitive Coalition, a distinguished alumnus of Central Washington University and he has been an Alaska business leader for more than 40 years.