Photos from the annual company picnic

“Although it rained the whole day, the cedar trees in the picnic area provided some cover for most of the attendees. We had around 900 people which is in line with what we have had in the past,” says Lynden Picnic Co-coordinator Kevin DeKoster of LTI, Inc. “Considering the weather I was somewhat amazed at this year’s turnout.” Those 900 people consumed 1,200 rolls, 1,000 ears of corn (husked by LTI, Inc. and Milky Way drivers, Lynden Tank welders and LTI, Inc. shop maintenance personnel) and 1,200 servings of beans and salad.  Employees from all over the country come together each year in Lynden, WA to celebrate with co-workers, family and friends.

Here are some scenes from this year’s event:

LTI, Inc. Director of Safety and Compliance Jeff Kok begins preparations for over 400 pounds of salmon with Hank Jansen’s “secret” sauce to be added later. Jeff arrived around 8 a.m. and had four helpers to cook the fish.

Doug Gustafson (in cowboy hat and apron) showed up at 3 a.m. to barbecue almost 450 pounds of beef in an open fire pit. He is assisted by two Lynden Lions Club volunteers also wearing red aprons. Doug has been a part of Lynden picnics for more than 30 years. 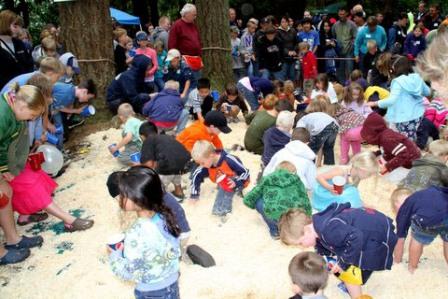