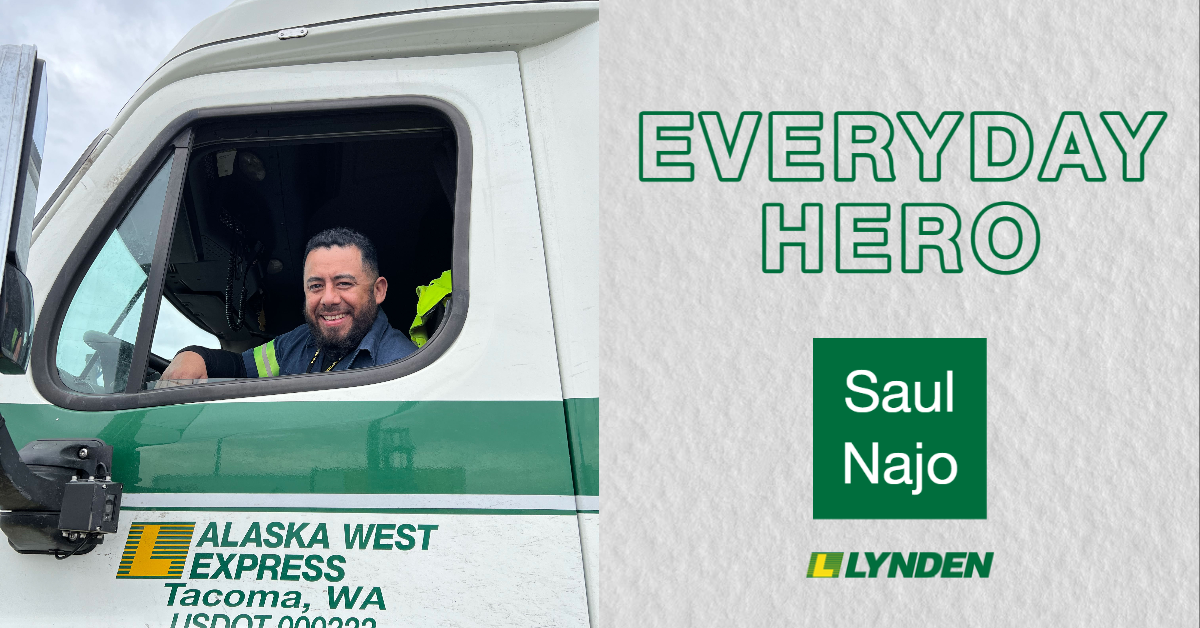 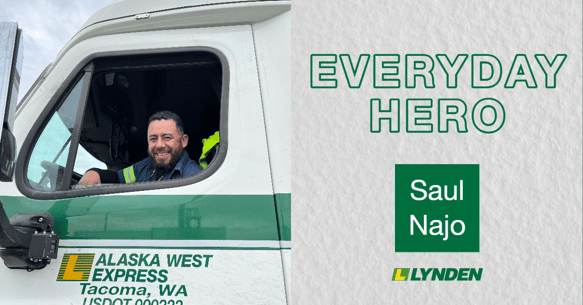 Favorite Movie: The Fast and the Furious

For Fun: Leisurely rides on my motorcycle

How and when did you start working for Alaska West Express? Have you worked for or done projects with other Lynden companies?
I started working for Alaska West Express shortly after working for LTI, Inc. for four months hauling containers to and from various customers in and around the Seattle-Tacoma area. Once a week I would go to Grandview in Eastern Washington to a Walmart Distribution Center. I enjoyed driving for LTI, Inc., however what I really enjoy is hauling heavy construction equipment as I did that while I was in the military.

One day I met Craig Conner, a driver from Alaska West Express, while waiting in line at Alaska Marine Lines, and we shared stories about what I did before trucking. He kept smiling and asked me where I lived. I told him I live in Lakewood, WA (near Tacoma). “And you work in Seattle?” he said. He proceeded to tell me that he knew of an opportunity I would really love. He called his boss and then told me “my boss wants you to give him a call.” I made the call, and two weeks later I started working with Alaska West Express doing what is in my blood! Hauling everything from a mini excavator to equipment as big as a crane.

What is a typical day like for you?
A typical day for me at Alaska West Express is normally an eight-hour day in support of various customers. Whether it’s a flatbed full of drilling equipment, or a machine that needs to be transported to a job site or the barge.

What has been most challenging in your career?
The most challenging aspect is dealing with folks out on the road that don’t respect driving distances for tractors and trailers. However, being patient and diligent and paying attention to everything that is going on in front and all around me, is what helps me get through my day while out on the road.

What are you most proud of in your career?
I am proud of my work. Sometimes I stand back and observe something that I have transported or built, and I say to myself “I did that.”

Can you tell us about your family and growing up years?
My family is from Salvadoran descent. My childhood years were spent with my grandparents. They did their best to provide for me while my parents attempted to migrate to the United States in the early 1980s. My mother succeeded and became a U.S. resident. My father did not make it and was killed in El Salvador when I was four years old. I eventually made it to the U.S. with my mother’s help. I attended junior high and high school in Los Angeles. Shortly thereafter, I joined the Army and made it a 22 ½-year-long career earning my first retirement at the age of 42. While in the Army I met my wife, Herbina, who was also an active duty soldier. We got married and raised three beautiful children.

What was your first job?
My first job was detailing cars. It was a short-term job while waiting to ship out to basic training for the Army in 1995.

What would surprise most people about you?
Most people are very surprised when I tell them how old I am. It makes me feel good and assures me that I have taken pretty good care of myself throughout the years. I am 45 years old.

How do you spend your time outside of work?
Outside of work, I spend my time with my wife. On sunny days we are exploring Mount Rainier trails, or enjoying the wind on our faces riding my motorcycle.

What do you like best about your job?
What I like best about my job is the diversity of what we do. For instance, we don’t come to work and do the same repetitive workday in and day out, such as dropping a trailer or sitting at a dock waiting to have someone else load you. I love that we have to think and be creative when building loads, securing equipment, loading and unloading equipment. Best of all, I get to go out of town often. It helps to break out of the monotony of being in town every day.