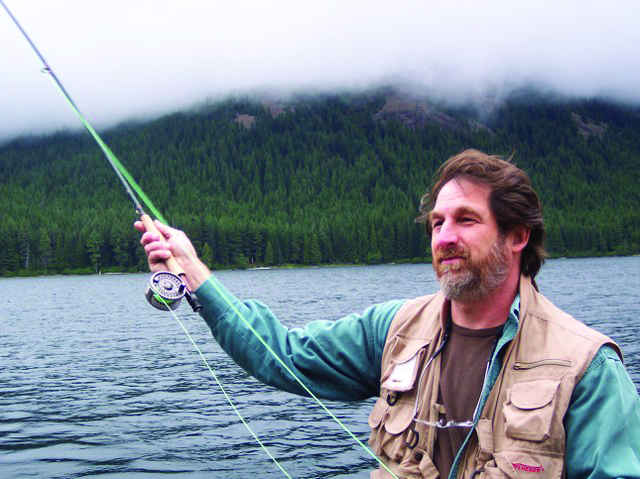 Twelve veteran Lynden employees wrapped up their careers at the end of 2020. We wish them well in retirement. 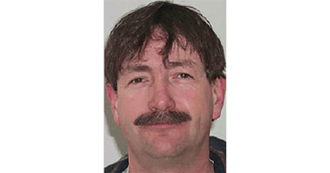 Mark Sheehan, Alaska Marine Lines and Northland Services, 40 years
Mark came to his job at Alaska Marine Lines through his brother Tom Sheehan. Tom and Mark both worked for Northland initially and later moved to Alaska Marine Lines. Mark went back to Northland and continued his career there until the 2014 acquisition by Lynden. He retired last month as Marine Operations Manager. It's been a long and storied career, but by far the most significant event was meeting and marrying co-worker Cindy Sheehan in 1999. Cindy also retired in December. "I have been so happy to be a part of the Lynden team," Mark says. In his marine career, Mark has saved many castaway and stowaway critters from certain death in Seattle ports, including stray cats, otters, pelicans and a hawk. A few years ago an albatross hitched a ride on a voyage from Honolulu to Seattle. Mark first saw the bird when the night crew pointed it out to him. The bird was severely dehydrated and emaciated. Mark called the Seattle Aquarium's veterinarian who brought the female bird to a Wildlife Care Center where it was treated for pneumonia and survived. It's no surprise that in retirement, Mark plans to volunteer at wild and domestic animal rescue organizations.

Lu Jackson, LTI, Inc., 37 years
As a Human Resources Manager for almost four decades, Lu has worked for four Lynden presidents, including the late Lynden patriarch Hank Jansen. "I have such great memories of working with him," she says. "It's nice to see that the integrity, philosophy and character of the company has withstood all these years." Although she is excited about retirement, Lu says she will miss the people. "Everyone says that, but it's really true." Lu handled everything from payroll to dispatching in her career and is very proud that she was never late to work – ever – in 37 years. Retirement will find her on her farm caring for animals, enjoying outdoor activities and getting to know her two new golden retriever puppies that joined the household just a week after she retired. Lu was featured as the December 2020 Everyday Hero. To read more about her, go to www.lynden.com/heroes. 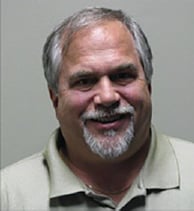 Mike Malone, Alaska Marine Lines, 35 years
Back in 1985, Mike started working in the Container Freight Station (CFS) warehouse. He then worked in rates and billing, pricing and finished up his career as Pricing Analyst. "Back then, we had just one sailing to Southeast Alaska, then it was twice a week. The ARM barge was added to service Central Alaska and Prince William Sound and then the purchase of Northland added Western Alaska and Hawaii. "We've seen quite the growth," Mike says.

"I have so many memories of all the people I've worked with, it would be hard to list just one, but working with the Freitrater program, coming up with auto rating and smart prompting cut the number of corrections we were seeing significantly."

After years of sitting in either traffic or at his desk, Mike says he is looking forward to getting some regular exercise, and he has a lot of projects to do around the house. "I would like to travel once my wife retires and maybe take some actual guitar lessons. I've really enjoyed working with all the people at Alaska Marine Lines and Lynden over the years. It's a really top-notch organization from the top down. 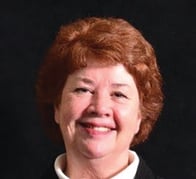 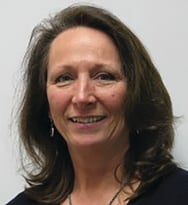 Cindy Sheehan, Alaska Marine Lines, 31 years
Cindy began her career with Alaska Marine Lines in 1989 at the suggestion of friend and now Lynden Logistics Services Manager Becky MacDonald. She was the first female barge checker in the history of the company although "I didn't know the difference between a chassis and a container at the time," she says. Her first office was a container under the First Avenue South Street Bridge, now Alaska Marine Lines' Y-2 yard. She also worked with two brothers, Mark and Tom Sheehan. Tom worked for Alaska Marine Lines, Mark for Northland Services. She continued to work with Tom over her long career, and she married Mark. Over the years, Cindy worked on a variety of Alaska Marine Lines projects, including the first Alaska Railbelt Marine sailings to Whittier, AK. She was soon promoted to Customer Service Manager, followed by Director of Customer Service in 2013 and Vice President of Customer Service in 2016. "I've always loved working with customers and took a great deal of pride and pleasure helping them," she says. "At Alaska Marine Lines, we're committed to keeping real, live people to talk to rather than recorded options to answer callers' questions." Cindy and Mark both retired last month and now plan to do some camping and fishing. Cindy will also start some quilting projects to donate to the American Heroes wounded veterans and Children's Hospital in Seattle. 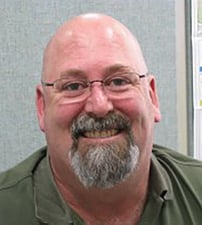 Jeff McKenney, Alaska Marine Lines, 31 years
"After 13 years of owning my business, I took a position with Alaska Marine Lines to dispatch and manage the trucks and operators," Jeff says. "When a sales position opened in Seattle, I thought it was the right time to advance my career and use the knowledge I had learned over the years to sell the services Alaska Marine Lines offered." More than 30 years later, Jeff retires as an Account Manager with experience in both operations and sales. "I feel lucky to have had a position where I worked with people who were my friends and colleagues. Alaska Marine Lines and all the Lynden companies have made my job fun. Our abilities to be innovative through equipment design, schedules, and online tools offers so much to the customer compared to our competition. The fact that we can pull multiple Lynden operating companies together to offer the customer a One Lynden solution has a lot of merit."

Jeff says Lynden has been a great company to be a part of and he appreciates everything the company has done to support his family. "I have really enjoyed providing the customer with a positive experience, showing customers what Lynden can do and being part of Lynden's success." Jeff's retirement plans include boating, fishing and traveling the U.S. via RV. A trip to the Grand Canyon is one of the first stops on the itinerary. Jeff was featured as the November 2020 Everyday Hero. To read more about him, go to www.lynden.com/heroes.

Greg Nierman, Lynden Incorporated, 27 years
Greg, pictured right, started working for Lynden Incorporated as a software developer in 1989 and transitioned to supervisor, manager and back to developer by the end of his 27-year career. "There were about 15 people total in IT when I started, and now there are nearly 70," he says. Greg's most memorable work project over the years was working on the Cross Dock initiative. "I will always remember the wonderful people I've had the honor of working with," he adds. Greg's plans for retirement include spending time with his grandkids, coaching archery and building and playing guitars. 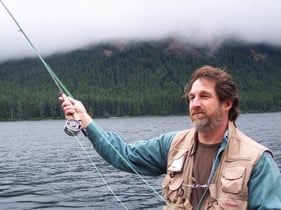 John Walker, Lynden Incorporated, 20 years
Over his 20 years with Lynden Incorporated's IT Department, John says he will remember Side-By-Side Billing, numerous ILS (Integrated Lynden Systems) integrations and Route Trip Maintenance as his favorite projects. As a Senior Programmer Developer and Applications Development Supervisor he saw IT grow by "leaps and bounds" as well as the applications that IT produced for Lynden's operating companies. "Working at Lynden has been more like an adventure than a job," John says. "There is always something new to learn and problems to be solved. But it's the people that I will miss the most (certainly not my commute!). I've met a lot of great people over the years and hope to continue the friendships we've established." Retirement plans include visiting family more often, traveling, fly fishing (see picture), golf, photography and chainsaw carving. 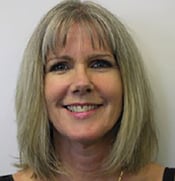 Pam Sanchez, Alaska Marine Lines, 18 years
Pam was a fixture in the customer service department for many years, making sure that receiving, billing and customer service tasks ran smoothly. In a single day, she might handle 50 questions about pricing, scheduling, logistics, cargo claims, purchased transportation both via phone and email. "Over the years I was always impressed with how Alaska Marine Lines worked to improve their service to customers," she says. "We always let them know we are here for them and that we care." Although Pam says she will miss working with and talking to her co-workers, she is looking forward to doing all the things she didn't have time for when she was working. Her plans include planting a garden, tackling home improvement projects and having time to exercise. Pam's son, Matt Miller, works at Northland and will carry on the family tradition at the Y-5 warehouse. 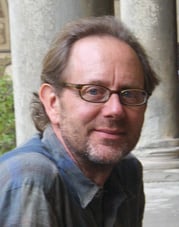 Bob McGrath, Lynden Incorporated, 8 years
Bob began work for Lynden in 2011 as a contractor, auditioning with Rick Nuckolls on the Master Customer Master (MCM) application. "I was hired on May Day, 2012. This job has been the pot-o-gold at the end of my career rainbow, which has spanned four decades," he says. "I began years ago as a PICK programmer and finished at Lynden as a programmer. In between, I worked in a variety of related job roles involving both hardware and software. There have been immense changes over the course of my career, but I think the change in speed and scale, in all realms of computing, has had the greatest impact."

Bob lists the following as highlights of his Lynden career: the HAZMAT implementation, developing the UV/TariffTrak interface used in the pre-ship and billing systems, the UV2XML document interface, and working with great teams on the first and subsequent ILS migrations.

Retirement will bring changes. "We will be moving to Chicago to be with family for a while," Bob says, "but will eventually come back home to Whidbey Island. Between Chicago and home, we plan to travel and live abroad. Once back home, I'd like to pick up ceramics again, bake up a storm and teach at-risk kids programming as a model for success."

"Lynden is a great company and this has been one of the best jobs of my career," he adds. "The values guiding Lynden come from the top down, but seem to be deeply embedded in the company: ethical, generous, disciplined, and caring for employees and community. In the end though, it is the Lynden people I admire most. I was lucky to be part of this, even for a short time."