Lynden companies continue to be committed to working lean and green every day of the year.  Since 2008, improvements such as lighting upgrades, motion sensors, heating and air conditioning improvements, and strategic insulation have resulted in dramatic energy efficiency improvements.

Alaska Hovercraft in Bethel replaced High Pressure Sodium (HPS) lights with high efficiency fluorescents at the airport and shop and saw an immediate 26 percent reduction in electricity use. “We recouped the cost of both upgrades in less than two months. The new lights are so bright that we can shut down half the warehouse lights during low traffic work hours without any safety concerns,” says General Manager Kevin Carter.

At Alaska Marine Lines in Seattle, the new 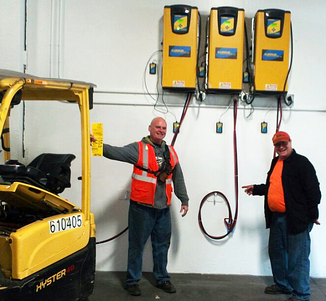 Other improvements throughout Lynden companies include:

“A number of our companies participated in the Alaska Energy Authority program and signed up for audits to identify priorities for energy upgrades in 2011 and 2012,” explains Anna Deal, Lynden’s Green Team and Green Initiative Coordinator. “The greatest opportunity for savings comes from replacing inefficient lighting, installing automatic controls such as digitally controlled thermostats and motion sensors, sealing air leaks and repairing insulation around dock doors and other areas.”