Lynden International ships Russian aircraft parts from Spain to U.S. and beyond

S7 Airlines is the second largest airline in Russia and a long-time Lynden International customer. Over the years, the carrier has called upon Lynden for a variety of projects. A project toward the start of this year involved disassembling an Embraer E-190 aircraft in Madrid, stripping it to the wings and fuselage and shipping the spare parts to S7 subsidiary Nelson Parts in Bend, OR.

According to Sergey Buchumov, Russia Sales and Marketing Director, Lynden was handling about one shipment a week ranging from an Auxiliary Power Unit (APU) to a fuel thruster weighing 2,000 pounds. "This project required many of our services," Sergey says, "such as brokerage and hazardous freight transport for aviation batteries." The first shipment of 8,000 small parts required 8,000 line items with all the necessary documentation for each. This inaugural shipment also included a freak snowstorm in Madrid that shut down roads leading into and out of the area.

"Snow in Spain was not the type of hurdle we were anticipating with this project," quips Daniel Gotham, Business Development Director, Global Projects. "They don't salt roads in Spain."

Lynden provided customs and import services to the U.S. and door-to-door delivery to the Bend airport and the airport hangar where the parts were consolidated and stored. When the aircraft parts were eventually sold to domestic and international buyers, Lynden handled that as well, which included ocean and air transport. "We are often moving the same parts twice; from Russia to the U.S. and then again from Oregon to a new destination," Sergey explains.

In addition to S7, Lynden serves nine other Russian aerospace customers from its offices in Moscow and St. Petersburg. For those producing aircraft, Lynden moves production parts and for those already in operation, repair parts for Aircraft on the Ground (AOG) situations and other needs. Parts are often sourced from Boeing and other U.S.-based suppliers allowing Lynden to call upon its network of Service Centers for expedited service. 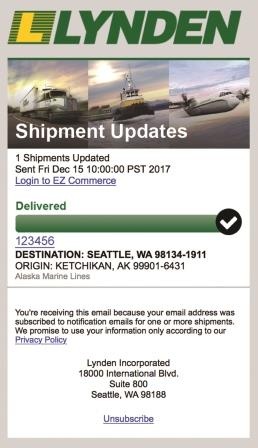 Lynden is starting off the new year by offering customers improved online shipping tools. Beginning this month Lynden will introduce Shipment Updates, a new feature that makes it easier for customers to keep track of shipments throughout the shipping process – from receipt by Lynden to delivery.

Customers may choose to receive email updates for all of their shipments or only for the individual shipments they specifically request. The real-time shipment updates are the latest in a suite of online enhancements under development to make it quicker and easier for customers to interact with Lynden. The new feature is available to Lynden customers and can be accessed through either Standard Tracking or EZ Commerce. Customers will be able to include any email party (such as suppliers or their own customers) on the update messages so everyone can see when a shipment is received, enroute and when it is delivered. For more information on how to start using Shipment Updates, please visit www.lynden.com/updates.

Users of Lynden's EZ Commerce tracking will also see new features in 2018. Applicable shipments will display additional information, providing detail down to the individual pieces of freight on a shipment, including the equipment identification number and type of equipment it is located in. This information will help customers better manage their freight and inventory and will be especially useful for projects or more complex moves. The freight-level detail feature will show automatically in the coming weeks whenever a customer tracks shipments within EZ Commerce.

Delivery receipts are also getting a refresh to better fit customer needs and create a standard look across Lynden companies. The format will be more efficient and easier to read and understand. The new receipts will be rolled out gradually to customers and will include options such as the ability to have multiple shipments on one delivery document, or deliver partial shipments.

"Our goal is to provide Lynden customers with a set of best-in-class self-serve tools, giving them ultimate control and visibility of their shipments," explains Ann Suver, Vice President, Information Technology. "We are proud to offer these new features for our customers."

"When we ask customers for feedback, we often hear that they want more control over their shipments and transparency into the freight movement," says Director of Marketing & Media Ryan Dixon. "Lynden has done a great job of responding to our customers by developing a new self-serve style of tracking, more information about the freight they are shipping and giving them more choice with receipt documentation."