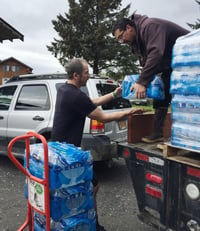 When a water main broke in the small community of Kake, AK, the mayor and two city employees put out over 2,000 feet of fire hose to bypass the blown-out section. While that solved the problem for businesses and homes, it did not provide drinking water. Alaska Marine Lines and Arrowhead Transfer teamed up to donate three pallets of bottled water and shipped it to Kake to be distributed to the 10 percent of homes still in need of potable water. "I distributed the water just days after the break and received many thanks and high praise for the companies' kind gesture," says Arrowhead Operations Manager Adam Davis. The companies also received a thank-you letter from the mayor and city manager. 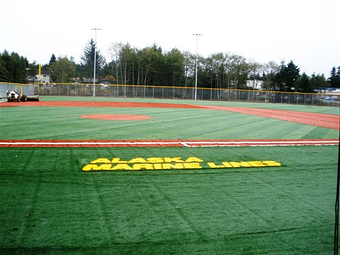 For years, Sitka High School baseball coach Ed Conway tried without success to work out a plan that would restore his team’s eroding baseball and softball fields. So he went to his power lineup.

Ed tapped into the services of Alaska Marine Lines, Arrowhead Transfer and a handful of city and political administrators to help him build his field of dreams in Sitka this past summer. He recruited Senator Bert Steadman of Sitka and Representative Bill Thomas of Haines to aid his cause. The elected officials helped secure a $2 million state grant that brought the dream one step closer to realization.

He then worked with Arrowhead Transfer’s Vice President of Operations Paul Haavig and Alaska Marine Lines who reduced the shipping rate on 1.2 million pounds of freight to bring the materials from Seattle. Suddenly, the long-time dream became reality.

The new venue was officially dedicated in a ceremony on Alaska Day. Paul was in attendance with Steadman, Thomas, Alaska Marine Lines President Kevin Anderson, Arrowhead Transfer President Gordie Harang, Sitka Mayor Mim McConnell and approximately 75 others, many of them ballplayers and construction workers on the project.

“The whole community is excited about it,” Paul says. “Everyone had a part in making it happen.”