Locomotives all arrive safely by barge in Skagway 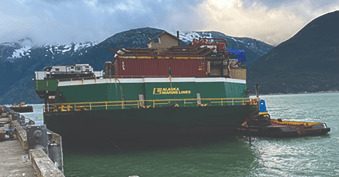 Recently the Whittier Provider and the Bering Titan delivered two locomotives to Skagway for the White Pass & Yukon Route Railway. This delivery completed the transport of six new locomotives to replace the old fleet which was built in the 1960s. Weighing in at 265,000 pounds each, the new engines are 30 percent larger than the old. Their size required a special rail sailing of Alaska Marine Lines' Southeast Provider last year when the first replacement engines were brought to Alaska.

"All the locomotives were transported on special barges that feature tracks on the barge deck designed to move rail cars," says Skagway Service Center Manager Cory Bricker. The new locomotives were built by National Railway Equipment Company in Mount Vernon, IL then shipped to Seattle.

Alaska Marine Lines has moved locomotives for the railway before using a heavy-duty dolly as a means of transport. The dolly and locomotive 'package' were stowed onto the deck of a regular barge, which allowed for maneuvering upon arrival. This time, the locomotives rode the rail barges and were unloaded by crane for placement on the White Pass railway.

"These locomotives are valued at about $2.5 million each so everyone was invested in making sure the move went smoothly and safely," Cory says.