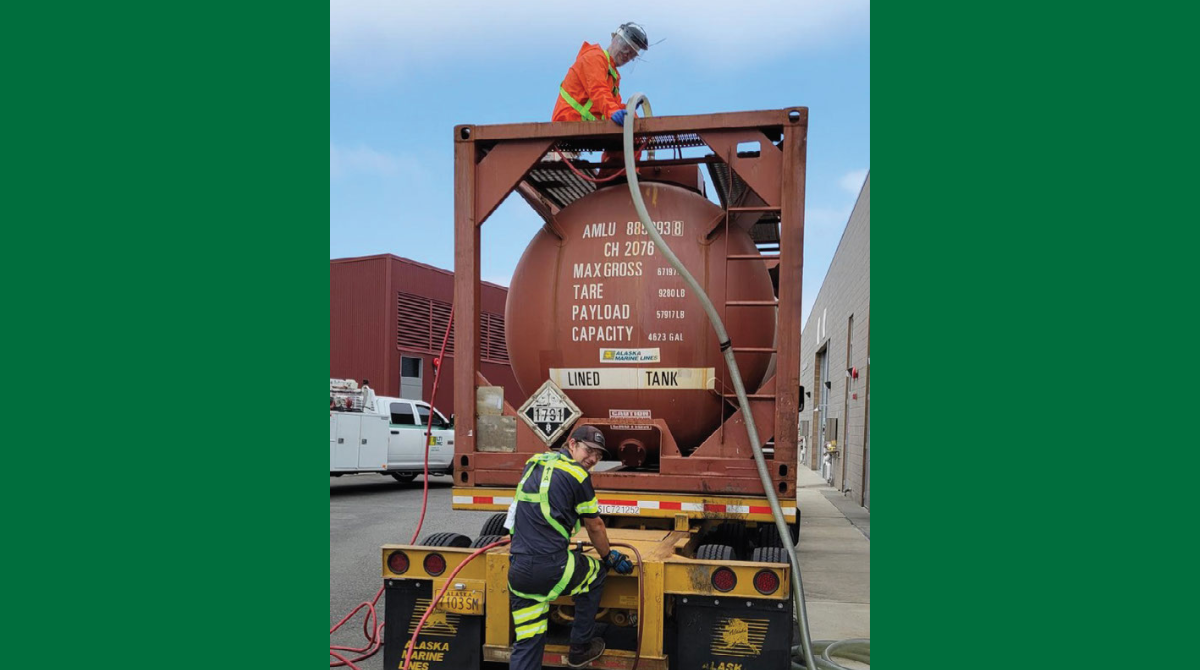 Lynden companies stepped up to help the City of Anacortes, WA when it experienced a shortage of chlorine for its regional water system. Despite a national shortage of sodium hypochlorite (chlorine), employees from Lynden Logistics Services, LTI, Inc. and Alaska Marine Lines worked together on a plan to deliver chlorine to the city as quickly as possible. Lynden Logistics Services moved 21 totes of chlorine product from Houston, and LTI, Inc., using Alaska Marine Lines' fiberglass-lined ISO tanks, delivered two loads from California to Anacortes. Thanks to these efforts and others, the treatment plant is now at full capacity and the regional water system is stable.

"The City of Anacortes is extremely thankful to Lynden as they assisted Marathon Refineries with the shortage of sodium hypochlorite," says Anacortes Mayor Laurie Gere. "This is an amazing community and the protection of the safe drinking water for our region was a priority for all. Again, the city has much appreciation and gratitude for the rapid and generous response."

Lynden has been a transportation partner to the Anacortes refinery for more than 20 years. "Our refinery team members have great relationships with a number of suppliers and contractors such as Univar and Lynden Logistics Services who were able to quickly respond to the supply shortage," says James Tangaro, Manager of the Marathon Anacortes Refinery. Pictured to the right is LTI, Inc. Driver Glenn Manning (top) and Mechanic Tyler Manke unloading a tank of chlorine.

"It's a great feeling to know that our assistance averted what could have been a very serious situation for the community drinking water supply," says Lynden Logistics Logistics Services Manager Becky MacDonald. "It was a great team effort by all three companies with assistance from Lynden Safety Director Jim Maltby on the bulk loads, Al Hartgraves, Anthony Knapp and the LTI, Inc. crew providing the drivers and quick response, and Alaska Marine Lines providing the tanks."

Tara Havard, of the Marathon Anacortes Refinery, expressed her appreciation for Becky's quick response. "Through Becky's efforts, not only were we able to keep the refinery situation under control, we were also able to support the City of Anacortes during this crisis. Not to mention the creative brainstorming with Alaska Marine Lines to use the ISO tanks to fill bulk loads out of Univar in California."

Tara also noted her relationship with Lynden is deeply rooted to her days growing up in Valdez, AK where she observed her grandfather, Mac McElrath, navigate logistical and supply chain issues on a daily basis while working for the Alyeska Pipeline Service Company. Mac worked closely with Harmon Hall, the father of Knik President Dan Hall. "That was the best training a kid from Alaska could have in creative problem solving, the power of relationships and taking care of your community," she says.