Last year, Lynden’s Green Team once again asked employees for their ideas for Lynden to be "leaner and greener."  The Green Team received more than 100 responses and many ideas have already been put into action.

New paperless processes are available due to employee suggestions. For example, Lynden's IT group has improved systems to upload electronic images eliminating the need to print and then scan.  Lynden Transport and LTI, Inc. are testing electronic-logs to replace paper time cards, and Lynden Transport is testing the use of handheld devices to collect signatures electronically rather than using paper driver records. Lynden International has reduced its greenbar paper waste by 40 percent by changing to electronic reports and eliminating unnecessary prints with their General Office is saving roughly 180,000 sheets of paper and $6,000 per year.

There were a number of recommendations to provide extended training for use of the paperless EZ commerce system. As a result, a Learning Management System (LMS) training piece is currently under development to teach sales, customer service and accounting employees how to help our customers use the EZ commerce.

Energy efficiency was a top priority for employees who responded to the survey. Between 2008 and 2010, nine Lynden locations invested in energy efficiency upgrades such as lighting, motion sensors, dock seals and fans. Together, these investments are saving nearly 1,000 megawatts of electricity, 25,000 therms of natural gas, 415 metric tons of CO2, and over $100,000 per year in energy costs. Lynden Transport's Fife Service Center recently replaced high pressure sodium lights with energy efficient LED lights, and upgrades are underway at Anchorage's South Air Park facility.  Also in 2011, Alaska Hovercraft in Bethel, Alaska Marine Trucking in Juneau, and Lynden Transport in Fairbanks conducted energy audits to identify top priorities for energy efficiency.

Lynden employees asked for recycling at locations where it was not yet available. Recycling programs are now in place at all 60 Lynden locations. Lynden recycles items that are accepted locally as well as toxic items like batteries, fluorescent lights and ink cartridges.  In remote locations in Alaska, the Lynden system is used to backhaul items to locations where they can be recycled. 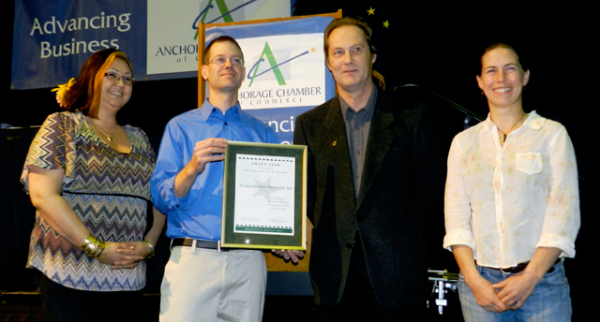 When it comes to reducing waste and cost, Lynden employees know where to look and what to do. Lynden's Green Initiative Team went straight to the front lines to ask what the company could do to improve its environmental performance. The employee survey results showed that employees welcome the opportunity to work "green" and some already have ideas ready to be put into practice at Lynden companies.

From lighting upgrades at Alaska West Express and Alaska Marine Lines to more recycling bins in the workplace, Lynden has taken the ideas to heart and implemented many already. Here are just a few of employees' energy-saving ideas:

From the Lynden Archives: This article was originally written in February 2010.