Lynden gets it done for North Slope customer 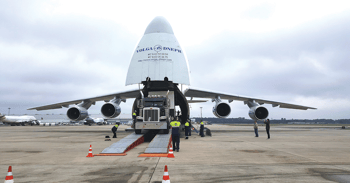 Lynden International's Anchorage crew has coordinated many charters, but rarely do they involve one of the world's largest commercial cargo aircraft, the Antonov 124. "When one of our customers 'rings the bell' and needs an 82,000-pound, 60-foot-long, 11-foot-high mud pump house for their North Slope Exploration project, guys like Jeff Pennell, Regional Operations Manager with Lynden International, answer the call," says Senior Account Executive Nick Karnos.

In his 32 years at Lynden, Jeff says there have only been a handful of times he had to hire an aircraft this big to haul freight. "It's no big deal to make this type of move happen," he says modestly. "This is no different than any of the other charters we set up, the freight and the airplane are just a little bigger."

But, in fact, the move was a big deal. The customer was losing almost a million dollars a day waiting for the emergency freight with a crew and drill rig standing by. It required finding the specialized aircraft, coordinating the movement of freight from the shipper in Houston to the airport, loading equipment on the ground, ground handling and the subsequent movement from Fairbanks to Alaska's North Slope. Jeff relied on the expertise of Steve Willford, Project Manager with Alaska West Express in Fairbanks for specialty equipment and handling. Once the freight arrived in Fairbanks, it was unloaded, trans-loaded to a separate trailer, then sent 400 more miles to Deadhorse. From Deadhorse, it went over an ice road to an island in the Arctic Ocean where crews were waiting.

"And if the move wasn't complex enough, Jeff added 20,000 pounds of wire spools to the Antonov load since there was more space available," Nick explains. The AN-124 eventually landed in Fairbanks at 2:36 a.m., where Alaska West Express was already positioned to get the freight moving north to Prudhoe Bay. "Round-the-clock communications and near constant updates on the cargo, aircraft and other equipment are appreciated by all stakeholders, but a little tough on the sleep cycle for guys like Jeff and Steve, not to mention our customers," Nick says. "This project started with inquiries to Lynden Transport, Alaska West Express and Lynden Air Cargo for solutions, then it fell squarely into Lynden International's scope," Nick says. "It was truly a One Lynden project."