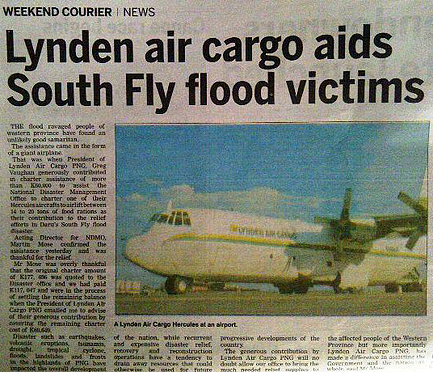 In June of this year, more than 29,000 people in the Western Province of Papua New Guinea were affected by flooding caused by heavy rains. In the township of Daru, flood waters destroyed homes and gardens leaving the victims without food, water and shelter. Lynden Air Cargo (PNG) Ltd. provided a charter to fly rice and other emergency supplies to the people of Daru. “We flew from Port Moresby to Daru,” says Captain Chris Nichols.  “The people were very excited to see us come in. The locals unloaded the first half of the airplane by hand into trucks, then a fork lift showed up and we unloaded the rest.”  Martin Mose, Director of the National Disaster Management Office praised Lynden for its assistance to the people of Daru, and for its contribution to help the government and the nation recover from the disaster. It’s estimated that the people of Daru will have to depend on relief supplies for up to three months until they can grow their own food.