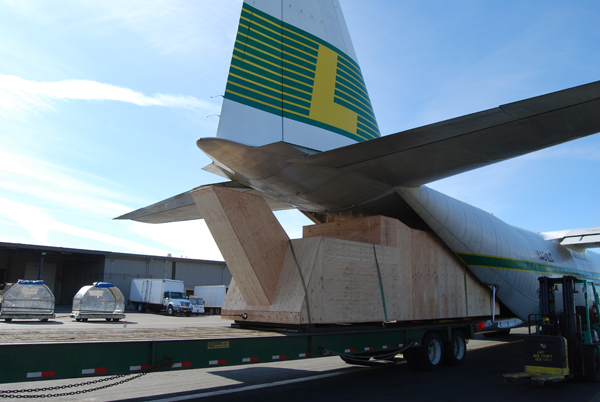 Add a six-seat Eclipse 500 business jet to the list of unusual items that have flown inside Lynden Air Cargo’s Hercules. The C-130 was put into service last year when a private aircraft was damaged upon landing in Nome, AK.

“The owner needed to get it out of that rem 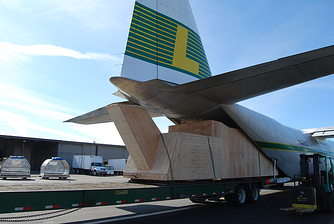 After investigating a complicated barge route to transport the plane south, Glenn Austin, Director of Quality at the repair shop VNE Jet, Inc., contacted Lynden seeking alternatives. “We had a short window of time to disassemble the plane and design and build a custom crate to transport the disassembled aircraft parts,” Glenn says. “Weight and dimensions were major concerns as well as protecting the aircraft from the environment and added damage.”

Bob and Glenn devised a plan to fly the crated Eclipse to Anchorage via Lynden Air Cargo then transfer it to a Lynden Transport van for a dedicated ride down to Nevada.  Lynden crews carefully loaded and unloaded the 8,600-pound crate via forklift at each transfer point: Nome, Anchorage and Henderson.

Glenn has heard a few horror stories of 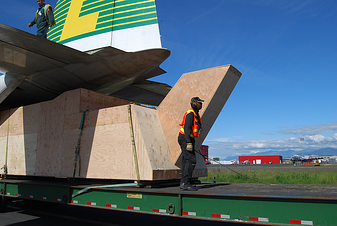 aircraft that were repairable only to be destroyed in recovery shipping. “We have scheduled multiple aircraft transports in the past and have a track record of never adding damage, so we were very concerned when choosing a carrier,” he says. “When we uncrated the aircraft, it was great to see that it fared well without even a scratch. We were very happy with Lynden’s service.”

VNE designed the 8x8x32-foot Eclipse crate for strength and versatility. A cable was installed on both ends so it could be winched in and out of tight cargo spaces. Only 260 Eclipse aircraft were produced so it was important to the company to protect this one so it can be repaired and put back into service.

“We used many Lynden resources on this custom move,” Bob says. “If we are asked to do this type of project again, this is the model we will use. Aircraft salvage operations could be a whole new niche market for us. “