Over the past four years, approximately 14,000 shipments from all over the world arrived in Alberta, Canada for the construction of a bitumen refinery near the Kearl oil sands. Lynden International, Lynden Canada Co. and Canadian Lynden Transport provided support and logistics to engineering firm AMEC for the refinery project which included 12 Lynden employees in Edmonton and Calgary.

“The last four truckloads were delivered in late March, but over the past few years we moved everything from small packages to heaters weighing 150,000 pounds,” says Walter Rakiewich, Canadian Lynden Transport President.  The Lynden companies provided international freight forwarding, warehousing, just-in-time shipping and truck transportation from Calgary to the refinery site 70 miles outside Fort McMurray.  Most of the project was based at the Foster’s Wheeler’s Construction Staging Area (CSA) facility in Northern Alberta.  Freight came from all over the world via air, truck, rail and ship, all coordinated by Lynden International. 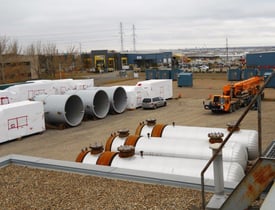 In 2014, Lynden was selected from all of AMEC’s global business units as a recipient of the Beyond Zero Outstanding Achievement award for working 100,000 hours accident-free.  Lynden Administrative Assistant Candice Fox also received an award for exceptional dedication to the CSA team (see photo below).

With an established Canadian presence through Lynden Canada Co. and Canadian Lynden Transport, Lynden is ready to continue its support of Canada’s oil industry. “I think we all feel a great sense of accomplishment with the way this project turned out and great pride in our employees who made it a success,” says Randy Jackson, Lynden International Vice President.

TORONTO – Lynden International Logistics Co., a leading provider of third party logistics (3PL) services for the healthcare manufacturing industry, announces its expansion in the Greater Toronto Area (GTA) with the opening of a second facility in Milton, Ontario.

"The new 65,000-square-foot facility expands our capacity in the GTA and adds to our network of locations in Canada which includes Toronto, Calgary and Vancouver," says Kevin Gillies, Vice President and General Manager of Lynden International Logistics Co. "This warehouse facility will meet the growing demands of our clients and allow us to continue to offer flexible and customized solutions on a national basis, whether in cold chain management, ambient storage or controlled drug storage."

Lynden International Logistics Co. was established in October 2000 with the acquisition of select Livingston Healthcare Services Inc. facilities, retaining over 60 years of experience and expertise within the 3PL healthcare sector.

SEATTLE – Lynden International, a full-service freight forwarding and logistics company, announces the opening of a new Service Center in St. John’s, Newfoundland. The new location adds a strategic link to Lynden’s extensive global network and will help meet the increasing demand for transportation and logistics in the region. District Operations Manager Jim Giles will manage the office, which will offer a direct connection between Houston, Texas, and the island to support its growing oil and gas industry.

“We are excited about the opportunity to introduce the Lynden International name and brand of service to the Eastern Canada market. Our experience and expertise in the oil and gas, fishing and mining industries are a perfect fit with the logistics and transportation needs of Newfoundland and Labrador,” says Rob Clarke, International Business Development Director in Canada. “In addition to offering air, ocean and expedited ground services, Lynden’s team of licensed customs brokers and experienced staff provide international import and export services, customized solutions and a variety of multi-modal capabilities through its sister companies.”

Lynden International, a full-service freight forwarding and logistics company, opened a new service center in Edmonton, Alberta, Canada, on January 1st. The new location adds a strategic link to Lynden's North American and Canadian network and will meet the increasing demand for transportation and logistics services for Canada's oil and gas industry. 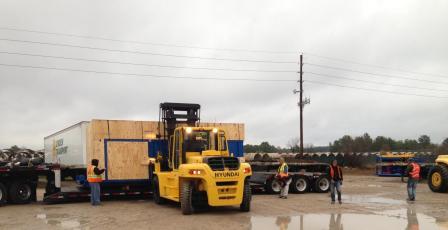 "Lynden has served Canada for many years through Lynden Transport in Edmonton, Calgary and Whitehorse and we are pleased to now introduce Lynden's international services to our customers in the Alberta market," says Rob Clarke, Lynden International's Canadian Business Development Director. "We are expanding our long-established truck transportation offerings to include import and export services, freight forwarding, customs brokerage and logistics and warehousing to support oil patch customers who are taking advantage of the booming oil sands development. We also offer customers the capabilities of Lynden's worldwide forwarding and logistics network with its trademark customer service, advanced technologies and solutions tailored to meet customer's individual logistical needs. This service center will give new customers greater transportation options and improve service to our existing customers."

The new service center is located at the Edmonton International Airport in Nisku, AB. Lynden has locations all across Canada, including Calgary, Edmonton, Fort Erie, Toronto and Vancouver. As an international air and ocean freight forwarder with more than 50 locations in North America, Lynden International offers customs clearance and works with U.S. and Canadian customs, carriers, suppliers, vendors and buyers to arrange air, ocean or truck transportation anywhere in the world.