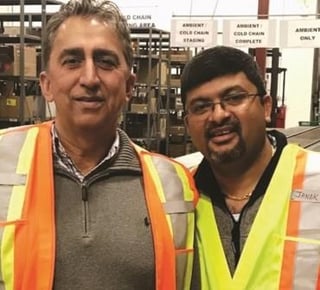 One of the many services Lynden International Logistics Co. provides to the pharmaceutical industry in Canada is shipping life-saving drugs to wholesalers, hospitals, clinics and doctors – often requiring after-hours emergency delivery.

On the night of Friday, Jan. 6, a call came into Lynden's after-hours emergency line from Health Canada requesting the immediate shipment of a life-saving drug that Lynden International Logistics distributes. Manjit (Johnny) Sandhu, warehouse supervisor at the Lynden Vaughan facility, responded to the call and drove to the Lynden International Logistics warehouse to prepare the order for shipment. When Manjit ran into a scheduling issue with the courier service, Lynden employee Janak Parmar volunteered to drive the product to the hospital even though it was six hours away in Montreal and in the middle of the night. The product was received at the hospital early Saturday morning, where it was administered to the patient. The patient's life was saved thanks to Janak's quick response and delivery. Health Canada contacted Lynden International Logistics afterwards thanking the individuals involved, and Lynden, for their prompt and life-saving response.

"Lynden would like to recognize Manjit and Janak for their tremendous service, but, more importantly, for their actions to help another person in need," says Brian MacAskill, Lynden International Logistics Vice President, Operations and Business Development.