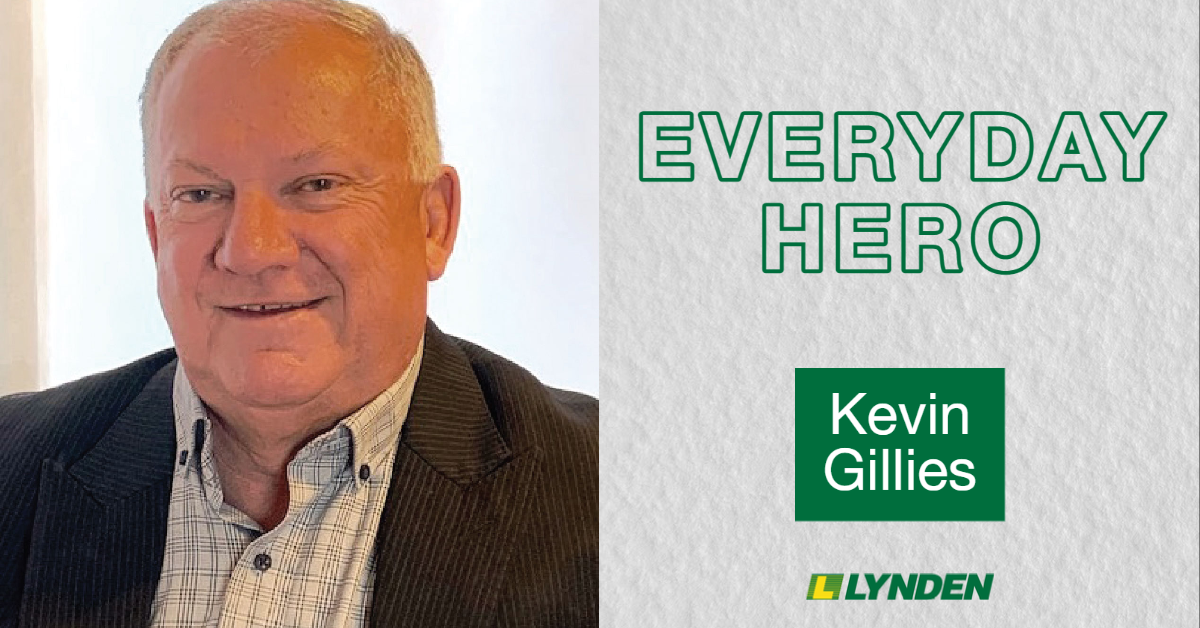 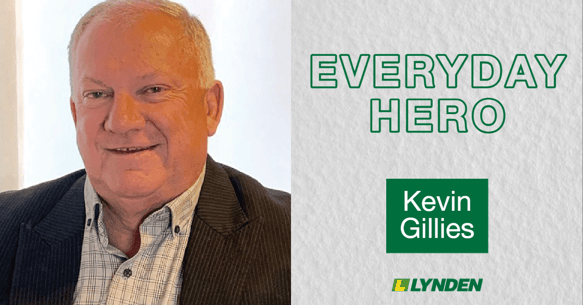 For Fun: Reading, spending time outdoors and at the family cottage in Saskatchewan

How did you start your career at Lynden?
I began my career with Lynden in late 2000 through an acquisition of Livingston Healthcare Services which became Lynden International Logistics Co. Lynden is now a leader in the warehousing and fulfillment of pharmaceuticals in Canada. I have over 40 years of service in the Logistics business and Lynden International Logistics Co. is a complex business model in a highly regulated and audited environment.

I started my career in this industry in 1977 working on the floor in a warehouse for Seaway Midwest, a Canadian company handling distribution of consumer goods and healthcare products. In 1983, Livingston bought Seaway Midwest, and I worked for Livingston until 2000 before joining Lynden. I moved up to supervisor, manager and continued taking on more senior leadership roles. By the early 80s, I was working predominantly in the health care distribution world, where I have spent the majority of my career handling all types of products within the healthcare portfolio.

What is a typical day like for you?
Working with the Lynden International Logistics Co. senior staff to provide direction for Lynden, meeting with both current and prospective clients, attending industry events and interacting with the various departments in our corporate offices in Seattle keeps me busy. I have traveled extensively for more than 30 years primarily within Canada from my home in Calgary to Toronto (my second home), with occasional trips to Montreal, Vancouver and Seattle for Lynden business meetings, and to other locations in North America as required. With the support of Lynden Logistics and Lynden Inc., we have been able to continue to grow the business, adding a fourth Canadian Distribution Centre in Milton late in 2014. We are set to open a fifth location in Guelph in the spring of 2020. Both of these new locations are in the Greater Toronto Area (GTA).

What do you remember most about those early Lynden years in the business?
The transition was very smooth for all the staff that came over to join Lynden. While there were certainly a few bumps, we had great support from the late Dennis Patrick, Randy Jackson and all various head office support groups. Working with Dennis on the sale was certainly a new and very interesting experience for me as the details were being worked out. With the assets of Livingston being divided between Lynden and UPS it was a complex sale (as most are) but I began to see what made Dennis tick and how he thought his responses through before he spoke. He would always explain why he did things in a certain fashion and my impression of a silver fox at work began to form.

What has been most challenging in your career?
Probably making sure we keep replacing our excellent staff with the same caliber of people when they retire or leave. When we became part of Lynden in 2000, we were excited to find that one of the key Lynden mottos, closely followed the Livingston motto, is that you are only as successful as the people you have working for you. Everything that we have been able to accomplish is due to our excellent leaders and day-to-day folks providing excellent service. They are all part of the puzzle that makes us work effectively together. When a senior manager, office or warehouse staff retires, you forget how much knowledge they have after years with the company. Our goal is to bring in good people to fill those roles, train them and keep the momentum going that we have created.

Audits are also challenging. Our industry is highly regulated and we are required to participate in around 30 audits a year, both for our customers and our own Health Canada audit at each distribution center (DC). Some are yearly, other are every two or three years. Basically we are asked to prove that we do what we say we do in terms of handling the products and keeping the product secure in a temperature controlled environment. They are checking our actions against our written Standard Operating Procedures (SOP) for our facilities and client specific procedure manuals put into place to manage client specific requirements for their day-to-day business. It seems that our QA group is always preparing for, completing or responding to a past audit. Each separate audit can take multiple days of effort.

What changes have you seen over the years, either in business or customers or technology?
Just about everything has changed. Obviously, computers were just starting to come into their own along with online inventory tracking when I first started in the 1970s. Back then we tracked inventory manually with paper. It’s been interesting to watch the various stages of computerization develop and how it dictates our business. We are heavily reliant on the IT group at Lynden in Seattle and they provide excellent support to us. The facilities themselves have evolved into larger, higher operations with the reliance on technology continuing to grow with far greater inventory control mechanisms in place. The powered equipment is now all electric and propane is not allowed to be used in the facilities. The security around our buildings, vaults and coolers has increased and evolved into specific protocols with specs that track the temp in the buildings, coolers and vaults. In the old days, vaults weren’t much more than cinder block rooms in a warehouse, now they are much more sophisticated with layers of security in place.

Employee training has also increased and become more regulated. We need to train an employee on many procedures before they can begin work with us. If we hire a warehouse or customer service person, they may need to learn 40 procedures in the early stages of their career with us, and up to 100 after they have gained experience. Each procedure or training session takes 20 – 30 minutes, you need to pass a quiz and must be renewed on a schedule, either annually or each time there is a change to a client’s procedures.

What project(s) are you most proud of?
In 2009 we secured the fulfillment business of the Canadian Pharmaceutical Distribution Network (CPDN), a consortium of 25 pharmaceutical manufacturers servicing over 600 hospitals in Canada. Lynden International Logistics Co. provides an order to cash service and collects the accounts receivable on behalf of the CPDN manufacturer members. The hospitals can order from any of the CPDN manufacturer members or multiple manufacturers on the same order, the merchandise is delivered at the same time, on the same invoice and we collect and remit the money to the manufacturers. I am proud of this business and that we just celebrated 10 years of a very successful partnership.

I am also proud of the dedication of our staff. An example is a few years ago, we had a critical shipment out of Toronto, going to Montreal at Christmas. Our supervisor was on call 24-7 for any emergencies. A drug was needed for a critical surgery and no planes were available. The supervisor ended up driving the drugs to Montreal that night to make the surgery. There are many other stories like that where our employees stepped up and acted as heroes to get important medicine to patients and doctors.

Can you tell us about your family?
My wife Bonnie and I will celebrate our 40th anniversary this month. We have four children; three daughters and a son ranging in age from 37 to 29. When the kids were younger, it was a busy time at our house. I was traveling a lot during that time so I called Bonnie the taxi driver. I typically would go out on the road for four days and then come back on weekends and pick up the slack. Three of our kids are in Calgary and one is in Fort McMurray.

I grew up with two brothers and two sisters in a small town of 100 people called Plato in Saskatchewan. I look back on those years fondly. It was a great place to grow up.

What would surprise most people about you?
I spent the first few years out of school working on the oil rigs in northern Alberta and then as a hard rock miner working underground in Thompson, Manitoba. Once I had kids I started helping coach my daughter’s ringette teams. On the weeks that I was on the road for work, I would come home on Thursday and have up to 10 or 12 ice times in the next three days for practices and games. I did that for about 15 years.

How do you spend your time outside of work?
We have a cottage at Clear Water Lake which is an hour north of Swift Current, Saskatchewan. It’s a small, spring-fed lake about a kilometer across. I grew up vacationing at this cottage and my siblings and I shared it as adults. The original cabin was built by my father in the 1950s. We have now taken that out and moved another house onto the property. My wife and I now own it and use it from May to October with our children.

I spend my weekends and occasional midweek afternoon on the golf course for the past number of years. I’m a hack with a 12 handicap, hoping to improve on it, like all the other hacks. I’m also a Saskatchewan Rough Riders football fan and a Calgary Flames hockey fan and follow their seasons. Once a Rider fan, always a Rider fan!

What’s ahead?
I will be retiring in January 2020. We have traveled all over the U.S. and down to Mexico and have taken a number of cruises, but we will now have time to see the rest of the world. We would like to spend a few weeks or even a month each year seeing other countries. We plan to go during the off season, get away from the cold and see a bit of the world.