Since mid-December, Lynden has been assisting with the distribution of equipment to administer the COVID-19 vaccine, but now the shipments contain the vaccine itself. Each morning Lynden Logistics District Operations Manager Bob Barndt gets a phone call alerting him to an incoming shipment arriving in Anchorage from Louisville, KY. Bob meets the plane and personally transfers the boxes of vaccine to Alaska Airlines where they are checked in as critical care shipments – the highest level of service available. After arriving in Bethel, AK, the Lynden agent receives the boxes and hand delivers them to hospitals in Bethel, Nome, Kotzebue and Barrow for distribution to village elders and front-line workers in those communities.

"For over 30 years, we have managed deliveries to remote Alaska communities," Bob explains, "but the vaccine shipments are different than anything else we have handled." Lynden provides white-glove service for each 40-pound box which is red-flagged as hazmat material. The vaccine is packed in dry ice and each box contains a GPS tracking device and temperature monitor. 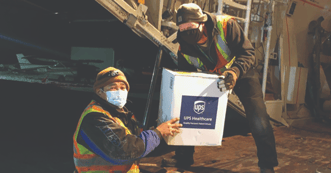 "We never lose control of the boxes and have eyes on them during the entire journey," Bob says. Shipping paperwork is also vitally important so the federal rollout of vaccines is documented. Pictured right, Lynden employees offload a shipment of the COVID-19 vaccine in Kotzebue, AK.

The vaccine deliveries will continue this year along with Personal Protective Equipment (PPE) such as gowns and gloves to protect those administering the drugs. Boxes of dry ice are sometimes shipped along with PPE to ensure that the vaccine remains temperature controlled at destination. "There is no guarantee that the destination hospitals or other locations have enough dry ice, so it's considered a precautionary measure," Bob explains.

The boxes are tracked from origin to destination, so speed and timing is critical. "Lynden has a reputation for excellent service and on-time delivery, so we are all working as fast and efficiently as we can to uphold that standard," Bob says. "We want to get the vaccine to those who need it most and to protect our customers and their families." In addition to utilizing Alaska Airlines, Lynden Air Cargo was called into service to fly the vaccine to Kotzebue last month and will continue to make its aircraft available if needed. In 2009, the State of Alaska also relied on Lynden Logistics to distribute the H1N1 vaccine to more than 400 locations.