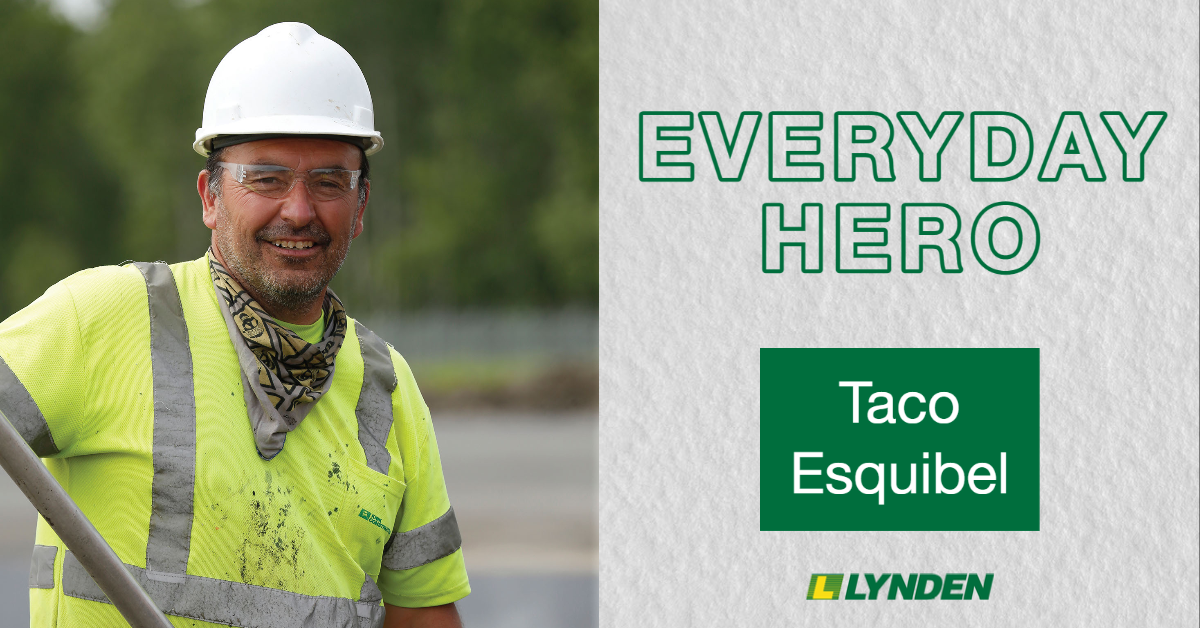 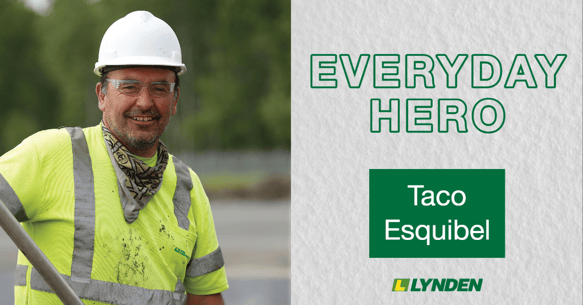 Favorite Movie: The Good, The Bad and The Ugly

How did you start your career at Lynden?
It all started when I met Neil Arthur and Ray Henrichs at Road Builders in Soldotna. We were working in Seward, Tok, Delta Junction and other places. They talked about working for Knik. They said it was a great job and they were making good money. When Knik eventually acquired Alaska Road Builders a few years ago, it became a full circle for me.

I put in my application and then went and bought a pager (we didn't have cell phones back then) so I would be able to respond right away if he called. If I didn't get the job with Knik I was planning to go back home to Arizona or Nevada. I decided to call Knik and ended up talking with Dennis Fuchs. He gave me the right names and connections in Bethel, AK and soon I interviewed with Bill Hanson. He was working on the Chief Eddie Hoffman Highway project. He hired me and I went to work right away as a roller hand on that project. Jim Kirsch was running the paving. He was an awesome guy and one of my mentors. He figured out that I knew what I was doing with paving. There were 8 or 9 of us that were fulltime employees then. We did dirt work, crushing and paving and offloaded barges. It was so interesting to see Alaska – the 24-hour sunlight, the 16 to 18-hour days. For someone in their 20s, it was nice to be doing something completely different.

I couldn't even pronounce the names of the places where I was working, and being from Arizona, I had never been around barges in my life. The first thing I saw when I arrived by small plane to the job site was a big barge.

What is a typical day like for you?
It all depends on what we are doing and where we are. Night shift or day shift? Am I paving, or doing dirt work? Making rip-rap? No matter what the project, you are planning it out the night before. If we need to start work at 6 a.m. I'm up one or two hours before the crew making sure things are ready and in place. If we are rained out, or someone is sick, you need to plan accordingly. If I'm at my own house in Anchorage and on my own schedule, I can go into the office and get things going. If we are all together at a work camp onsite, project managers will meet the night before and get up early to start our 12 to 14-hour days. We are currently not working on any projects, but things will start up again in mid-April.

What has been most challenging in your career?
The weather and some of the locations where we have to figure out how to work within the elements and available materials. Wake Island, Guantanamo Bay, Cuba, Kotzebue, Nome, Shemya Island, Platinum. Bethel, McGrath, Sitka… flying in is the only option usually. It can be pretty spooky for someone with no flying experience to go into these places in small planes. Rick Gray is one of the best pilots I've ever seen in my life. He makes sure we all get there safely.

The weather can create challenges like equipment freezing up – think of a water sprayer – and rules in different parts of the state. Shemya is one of the worst places I've been for weather. We were there for almost two seasons and only saw sunlight four times. Foggy and rainy with wind blowing so hard you can't see more than 50 feet in front of you. The wind was 20 mph on an average day. Our job was reconstructing taxiways and runways. The first year we used a machine with GPS control to run the machines. The only way to control the level and depth of the paving in the old days was to use a wire. The new machine uses lasers and a computer program to do that work, but the wind in Shemya had other ideas. It interfered with the lasers and the program shut off. We figured out what was happening the first night. The wind was vibrating and throwing the laser out of balance and we had heavy fog that created damp conditions that interfered with the lasers, too. We got it figured out, but it was one of the most challenging projects we've done.

It's also tough to be away from home for long periods of time. I try to keep the crew together and having a good time when we are living in camps on a jobsite. I get to know everybody and their families. You could be the Michael Jordan of construction, but if you can't handle the living conditions, you won't make it. You learn how to be cordial to your coworkers 24 hours a day 7 days a week for months on end. You are eating, sleeping and working together so you get to be a team real quick. Depending on where we're working, we might not have TV, internet or cell phone coverage. It's a challenge, but all part of the job.

What are you most proud of in your career, most memorable project?
Dora Hughes (Knik HSSE Manager) and I worked on the Cape Nome project for five years without an injury. We worked with the native corporation handling explosives and dealing with big rock making rip-rap for breakwaters and jetties. You basically shoot the mountain to create rock, run a rock sorter and move the big rock where needed. We received awards and jackets for working safe.

I'm a perfectionist. Over the years if something is going wrong, I speak up and ask what's going on. Sometimes people on my crew don't like that, but later they will come back and say, 'you were right.'

Can you tell us about your family and growing up years?
I grew up poor, so I now appreciate things I have earned with hard work. I have an older brother and sister, and a younger brother, Mike Esquibel, who also works for Knik as an office engineer and surveyor. The rest of the family is back in Kingman, AZ. Growing up I loved playing sports; they gave you a reason to enjoy school! I played basketball and football. I had a couple of junior colleges that were interested in me for football, but I didn't think I had the academics to do it. My dad had a service station and we also ran a roofing business as a second income. My dad worked construction for the road system of Mohave County. My grandfather owned the Central Commercial Lumberyard in my hometown.

My father instilled a work ethic in me. I liked to party, but if we had a roofing job on a weekend, we had to leave at 5 in the morning because it gets hot by midday. I would get home about 3 or 4 a.m., and he would get me up to go roof just a few hours later. He always said, 'if you are going to play all night, you are going to pay all day.' My older brother helped, and two cousins helped, too. I graduated in 1988 and moved to Alaska in 1992. In between I worked as a bricklayer/hottie. I made the mortar and brought it to the bricklayers in a wheelbarrow. I also moved the blocks and stacked them up for the job.

I also worked on the road system in Arizona, traveling all over to different cities working. I would live in my vehicle while I was on the road. It was a great life for a young man.

Once a year I try to get home. I miss my family. My mom and dad have come up to see me in Alaska. My sister has two girls and my niece lived with me for two summers to work in Alaska and check it out up here. Last year I took my dad and niece elk hunting.

What was your first job?
Working at a service station after school.

What would surprise most people about you?
I like to make my own food. I fish for salmon, smoke it and then can it with my buddy and coworker Dan Swanson. We drink beer and smoke fish for two or three days each year. I also enjoy making jam. Wild raspberry bushes grow in my yard, so I harvest them and make jam from the berries. Also, I'm a metal head. My favorite music is heavy metal like Megadeath, Slayer, Metallica and some of the new stuff like White Zombie.

What are you most proud of?
I feel like I conquered life and have made a good place for myself in the world. I didn't have a thing when I hit the state of Alaska. Someone owed me money and didn't pay up, so I decided to try a fresh start. I drove up the Alcan with a man I met 15 minutes before who was coming up to see his family. When I showed up, I didn't know anybody. A lady was supposed to give me a place to stay and then didn't help me. My heart sank. The first thing I thought of was going to the Catholic Church. Luckily, the guy I rode up with helped me and I stayed with his brother. My life has been good in Alaska, but it took a long time to get to where I am now. After living in Arizona, my first winter in Alaska was a learning experience. I lived in a dome house and the first morning it was 45 degrees below zero! 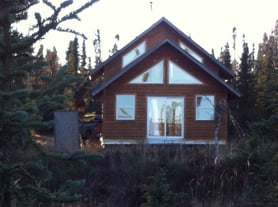 Eventually, I built a cabin on two acres on Mackey Lake near Soldotna (pictured right). I spend as much time there as I can. I met some people that are homesteaders there across the lake, and they helped me with the construction along with a lot of friends. Lately, I have been getting into spearing pike in Mackey Lake instead of using a rod and reel.

What do you like best about your job?
The feeling of accomplishment in finishing a project. You do the work, and it's there for years for cars to drive over or planes to land on. You are making things that last. It's been interesting for me to see the changes in Knik over the years. We went from a few people doing it all to separate work groups for paving, dirt and crushing rock. I feel fortunate to have been part of Knik back in the day. I like being outside every day and seeing different places. It's also nice to work with good friends like Dan Hall, who started the month before I did.