Congratulations to Lynden-sponsored racers and Knik Construction employees Richie Diehl (above right) and Pete Kaiser (left), taking first and second place respectively in the Kuskokwim 300 Sled Dog Race in February. The race route was changed this year to avoid contact with three remote villages for COVID-19 precautions. Richie won on the revised course with a record-breaking time of 36 hours and 8 minutes.

"This is a race I grew up on, and I love it. It's the biggest accomplishment in my mushing career right now," he says. Due to a schedule change he was also able to compete in and won the Bogus Creek 150 sled dog race three weeks earlier, which is customarily held the same weekend as the Kuskokwim 300. 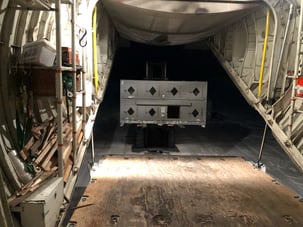 In March, Knik employees Richie, Pete and Dakota Schlosser all battled harsh, negative degree weather while competing in the 2021 Iditarod. Richie placed ninth in his ninth race outing. Pete, who won the race in 2019, was forced to scratch out of precaution for his dog team's health. Dakota finished 35th in his first Iditarod race. The Iditarod course was also shortened this year due to COVID-19 restrictions with start and end points in Willow, AK. After the race, Lynden Air Cargo donated space on its Hercules aircraft for Iditarod race dogs flying from McGrath back to Anchorage. Pictured right, race dogs are carefully loaded into the back of the Herc.

In addition to his race wins, Richie has a new beer named after him at Old Man Rush Brewery in Eagle River, AK. The new IPA is called the Real Diehl. "We wanted to give Richie some help and sponsor him in some way," says Reid McDonald, owner of the brewery.