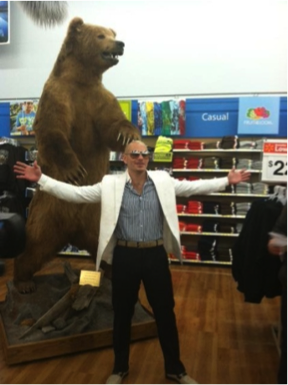 From a Taco Bell promotion in Bethel to Pitbull visiting Kodiak, Lynden has provided support for several high profile projects in Alaska this past summer.  The Miami rapper visited Kodiak (population 6,300) after a marketing campaign invited people to go to Facebook and “like” the Walmart location where they wanted him to be sent. The promotion went viral when Boston Journalist David Thorpe suggested that people send Pitbull to the most remote Walmart in the U.S. When voting closed July 16, Walmart’s Kodiak location had more than 70,000 “likes” on its Facebook page, making it the clear winner.

“Walmart contacted us to help them get the stage and sound system equipment from Anchorage over to Kodiak in time for the show,” says Mark Graves, Lynden Transport Service Center Manager in Anchorage. “The timeline was very short and required loading two 28-foot trailers to move via ferry from Homer to Kodiak. The challenge was getting all this equipment moved back from Kodiak to Anchorage in one day because the vendors needed it for a concert the next day.” Lynden’s Anchorage and Kenai operations teams worked together to get everything loaded and moved to Homer in time to make the ferry and returned to Anchorage for delivery back to the vendors.

During his visit to Kodiak, Pitbull appeared at a community event at the U.S. Coast Guard base attended by about 250 people. The rapper also received the keys to the city and visited staff at the Kodiak Walmart (above) where he was presented with a survival kit that included bear repellent. Pitbull stayed in Kodiak for three hours before flying out to continue his tour.