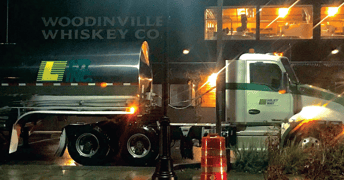 Add award-winning whiskey to the long list of LTI, Inc.'s food-grade hauls. Woodinville Whiskey Co. recently called upon Lynden to haul its premium 140-proof whiskey from Woodinville, WA to its aging and bottling facility in Quincy, WA. LTI, Inc. drivers are also picking up the mash byproduct from the whiskey distilling process and delivering to a farm near Monroe, WA.

Because the whiskey is flammable, it qualifies as a hazmat, food-grade load which is one of LTI, Inc.'s specialties. "The project really is a good fit for our strengths as a carrier," says Business Development Manager Al Hartgraves. Al says the new project came about through company teamwork. While LTI, Inc. Driver Cesar Cortez was delivering a load to one of the wineries next door to Woodinville Whiskey, he was approached by one of the owners. He asked Cesar if LTI, Inc. could provide the same pickup and delivery service for his company to Eastern Washington. Cesar passed along the request to dispatcher Eric Bordynoski who got in touch with Al and soon a contract was under way.

"LTI, Inc. has never hauled whiskey before so specific equipment needed to be sourced and drivers trained for this type of hazmat transport," Al says. The maintenance team of Dave Seaman and Jerry Crisp jumped into action to secure the highly specialized food-grade hazmat trailers, DOT 407s, needed for the project. Although the whiskey is picked up in Woodinville and delivered to Quincy, the run begins and ends at LTI, Inc.'s Sunnyside facility due to the wash facilities located there. 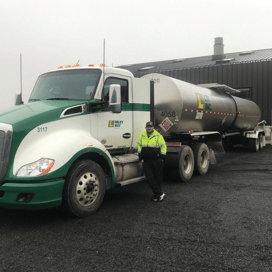 Sunnyside Driver Brandon Weaver, pictured right, was the first driver to haul the whiskey this fall, and he says it is a nice change from his usual route. "It's a lot of responsibility, too, though. Hazmat loads require an endorsement and intense focus, so safety is always on my mind." Driver Ed Flores is also hauling whiskey for the project.

The second part of the project is hauling the spent mash, which is grain left over from the distillation process. A full load is picked up each day from the distillery and delivered to a farm facility near Monroe where it is used to produce electricity for Qualco Energy. "The whole process is full circle and something we have not been involved in before," Al says. "It's an exciting new project for us to fully support the efforts of Woodinville Whiskey, and we will be bringing on more qualified drivers with this type of hazmat endorsement early in the year."

The grain for the whiskey is grown in Quincy which is where the whiskey is returned to age five to seven years before bottling. Woodinville Whiskey's expansion has positioned them to produce over 250,000 cases per year.