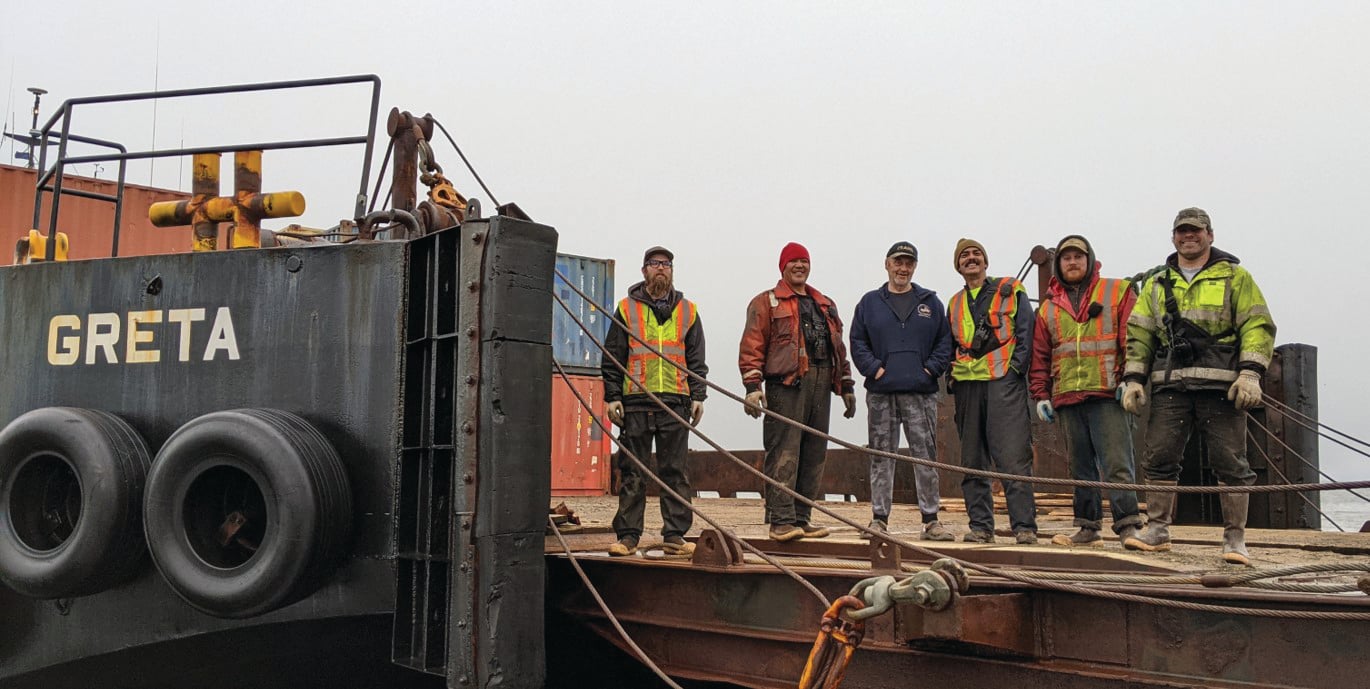 Lynden's captains, engineers, mates and deck hands do more than just deliver freight via barge, landing craft and tugboat. These mariners are the eyes and ears on the waters they sail, often being called upon to assist in emergency situations and to report on marine conditions for other vessels.

Just last month on the Kuskokwim River, the Bering Marine crew of the landing craft Greta pulled a man to safety after he fell off a seawall, while the crews of the Arctic Bear and Padilla assisted U.S. Coast Guard Cutter Hickory with safe navigation of the river channel.

According to Brandon Leary, Alaska Marine Trucking's Bethel Service Center Manager, "I was getting ready for bed and my wife, Alyssa, actually saw the man fall in the river. I ran down with a life ring that I keep on my deck, and I had my wife alert the crew on the Greta while I assisted the man in the water." The Greta crew responded with a Jacob's ladder boarding device, then contacted emergency crews who met the tug on shore and transported the man to a local hospital.

"The City of Bethel would like to extend thanks and appreciation to the Greta crew," says Bethel City Manager Peter Williams. Police Lieutenant Jesse Poole also expressed thanks for the quick actions of the crew, which includes Captain Mike Dawson, Engineer Clint Mathews, Mates Chris Benny and Fred Haag, and Deckhands Anthony Augusto and Manny Belarmino.

"Those of us who live and work on vessels must always be prepared to expect the unexpected," says Captain Jack Rasmussen, Bering Marine Vice President. "We routinely perform safety drills so our crews know how to act and what to possibly expect during an incident. These drills are a regulatory requirement but also essential to protect our crews and equipment. We are proud of the Greta crew for their lifesaving actions in a Man Overboard (MOB) situation."

Another Bering Marine vessel was on the same river providing crucial navigation information so the U.S. Coast Guard could mark the channel with seasonal buoys. This is a yearly task as the channel changes each year.

"The Arctic Bear tug was running the river as soon as the ice went out this year," explains Port Engineer Steve Isaacs. "The crew developed a good track line by using a skiff they launch off the tug, help from locals in the area, and from Captain David Curtis on Bering Marine's pilot boat Padilla."

When the USCGC Hickory arrived in June, the crew reached out to Captain Chuck Gaffney on the Arctic Bear. He provided track lines for the 2021 channel and the location of shoals and sandbars to mark with buoys for safe navigation. In addition to Captain Gaffney, crew members include Engineer Sean Brooks and Mates Joe Pirak and Dave Smith.

Hickory Captain and Commanding Officer Jeannette Greene reached out to the crew with a thank you for the yearly assistance. "I sincerely appreciate your help with river information, soundings and shoaling each year," she writes. The Hickory crew marked buoy 28 with a small bear in appreciation of the Arctic Bear and its crew.