Just another day in the Bethel neighborhood 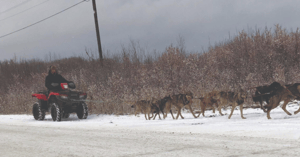 Lynden Air Cargo Captain Daryl Smith took this photo of Peter Kaiser as he was training his sled dog team. Daryl lives in Bethel, AK and saw Pete from his house. "I thought it would be newsworthy since he works for Lynden and is an Iditarod champion," Daryl says. Pete works for Knik Construction and Bering Marine. He won the Iditarod in 2019 and has won the Kuskokwim 300 sled dog race multiple times. Pete has plans to compete in both the Kuskokwim 300 and Iditarod races again this year.