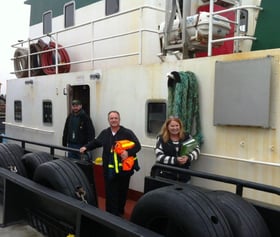 Executive management from Naknek Barge Lines, Bering Marine Corporation and Alaska Marine Lines met in Seattle earlier this year for the first training session to launch the joint Marine Safety Management System (SMS).  They were joined by Jim Maltby, Lynden Director of HSSE, and Rheagan Sparks, Lynden’s Marine Risk Manager.  Their objective: to educate participants about the internal audit processes within the SMS and to prepare them to conduct field audits aboard Lynden vessels during the 2016 operating season.

The first day of the training, led by Lynden Consultant Dione Lee of QSE Solutions, consisted of classroom learning and goal identification.  Participants took their newfound skills into the field on day two by conducting mock vessel audits aboard the Naknek tugboats Crosspoint and Polar Wind (see photo).  The group took turns in the roles of auditor and crew.

Implementation of a formal Safety Management System is a growing trend in the maritime industry, according to Rheagan. “Since the acquisition of Northland Services in 2013, the three primary Lynden maritime companies have been working to consolidate their pre-existing procedures into a more coordinated format,” she says. “The SMS allows the companies to standardize and document their procedures.  This is part of a continually evolving process of improvement that reduces the likelihood of accidents and promotes a culture of safety.”  The new SMS system is endorsed by Lynden’s maritime liability insurer, Steamship Mutual P&I Club, positioning Lynden as an elite operator within the maritime industry.

Captains from Naknek, Bering Marine and Western Towboat Company gave positive feedback about the January training.  “The SMS manual mostly reflects what we already do, but now it’s documented and accessible for everyone,” says Tim Kinkopf, Naknek General Manager. Future training sessions for vessel crews are scheduled later this year.