Freight gets white-glove treatment from Lynden 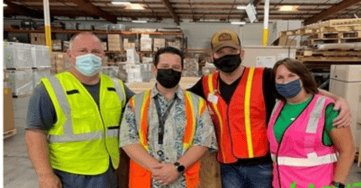 Rachael Ray is a big name in the cooking world, and her husband, co-host and business partner John Cusimano is also a well-known musician and founder of the band The Cringe. The couple recently renovated a villa in Tuscany that serves as a new home and studio for Cusimano. Lynden Logistics was asked to transport valuable musical instruments, mixing equipment and household items for the band and the show from Los Angeles to Genoa, Italy, this past fall.

“We wanted this air and ocean project to be a shining example of our value-add business,” explains James Bisho, Lynden’s Los Angeles Service Center Manager. “Although the equipment was in manufacturer packaging, we still had the items crated professionally to ensure that nothing was damaged or missing. Zero defects was the mantra, and everyone at Lynden did their part to make this happen. At our suggestion, Sam Jett, who is managing A/V and logistics for the villa project, came to our warehouse and meticulously went through his list of items for customs clearance in Italy. Being such a high-profile move, there was no room for error. All pieces were loaded into a sealed ocean container for added security.” With backlogs at seaports, the project was not without its challenges, according to Lynden Logistics Business Development Manager Maggie Parks. “The ocean carrier was delayed and the container was rolled on many sailings, but it finally made it into Genoa,” Parks explains. “Our goal was for John to simply unpack his gear in Tuscany, plug in and play, and for Rachael and her guests to have what they needed when they needed it.” Above photo from left, John Hollan of Fastforward Crating, and from the Lynden team James Bisho, Sam Jett and Maggie Parks.