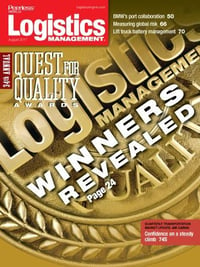 Lynden Transport was awarded its fifth consecutive No. 1 ranking and its 21st overall Quest for Quality Award in the 2017 awards issued by Logistics Management magazine. Lynden Transport received the highest scores among Less-than-Truckload (LTL) western regional carriers in the on-time performance, value, and equipment & operations categories and topped the overall weighted scores.

“We are extremely proud of our No. 1 ranking again this year,” says Lynden Transport President Paul Grimaldi. “We strive to help customers utilize the full range of Lynden’s capabilities and ‘only pay for the speed they need’. Our top marks in the on-time performance and value categories confirm that our efforts are making a difference to customers.”

“What makes the Quest for Quality Awards stand out in the market is the fact that the winners are determined by the readers of Logistics Management - the buyers of logistics and transportation services who put these carriers and service providers to work around the clock and around the globe,” said Michael Levans, Group Editorial Director of Peerless Media, LLC., the publisher of Logistics Management.

Logistics Management’s Annual Quest for Quality Awards is the culmination of a six-month research project conducted by Peerless Research Group. For more than three decades, Quest for Quality has been regarded in the transportation and logistics industry as the most important measure of customer satisfaction and performance excellence. This year 5,437 logistics and supply chain decision makers cast their votes.