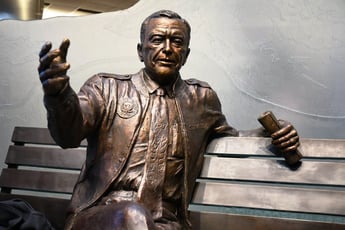 A life-size bronze statue of the late Alaska Senator Ted Stevens was unveiled Feb. 23 at the Anchorage airport that bears his name. With Lynden’s long relationship with the senator, it was only fitting that Lynden companies donate the transportation of the statue to Anchorage where it is now gracing the airport. Lynden assisted with customs for shipment of materials from China, and shipped materials from Los Angeles to Alaska for the background of the statue.

Alaska Marine Lines picked up the clay form from the artist Joan Bugbee Jackson in Cordova, AK for transport to Seattle. From Seattle, Alaska Marine Lines delivered the form to a foundry in Oregon for bronzing. Lynden Transport handled the final leg back to Anchorage and stored the statue until the installation and final unveiling ceremony at the Ted Stevens Anchorage Airport.

Karina Waller of the Ted Stevens Foundation thanked Jim Jansen and Lynden for their support at the unveiling. "This is such a wonderful tribute to the Senator who truly loved Alaskans and shaped our state," says Jeanine St. John, Vice President, Lynden Logistics Services.