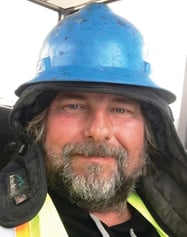 For Fun: Snowmobiling and spending time at his cabin in Caribou Hills on the Kenai Peninsula

How did you start your career at Lynden?
I was working for a paving company in Kodiak. A guy that worked with me was finishing the season running roller for Knik. He said they had a few weeks of work in Skagway for a screed operator. So I went to work for them at 24 years old. I flew up there and met Jim Kirsch. I got off the plane with long, bleached blond hair hanging down my back and I think Jim rolled his eyes when he first saw me. I grew up in the 80s and was a hair band/metal band guy. I had the hair to go with it. When I turned 40, I had 18 inches cut off. After I finished that first job with Knik, Jim told me there was more work for me if I was interested. It was a great job for a young man and it paid very well.

What is a typical day like for you?
Depending on the project, I may be traveling to a different location. If I am onsite at a camp, I wake up, eat breakfast and get to work.

What has been most challenging in your career?
Dealing with conditions at job sites. We have sub-zero temps, mud, ice, high winds, shifting earth or rock. Operating equipment safely while staying on schedule to get the job done is tough. Being gone for long periods with your work crew is sometimes a challenge for your family.

What changes have you seen over the years, either in business, customers or technology?
The evolution of equipment and technology is pretty cool. I totally blame my parents for my career choice. They bought me Tonka trucks when I was a kid and now the trucks, loaders and dozers are just bigger.

What project(s) are you most proud of?
We have had some projects in extremely remote spots where it is hard to get a barge into the site. A winter job in Chefornak near Bethel stands out in my memory. Our assignment was to move almost a million yards of dirt in five weeks to build a new runway. We had to strip a pit, get building materials to the site while dealing with freezing temperatures and ice. Other projects in St. Paul, St. George and the Pribilof Islands were also memorable.

A few years ago we needed to move a hovercraft from Anchorage to the slope. We took it apart in Anchorage in the spring. Some of the parts are tiny stainless steel nuts and bolts that come in a drum. Taking it apart wasn't bad but we had to re-assemble the hovercraft outside in Prudhoe Bay when it was blowing and below zero. It took us over a week to do it, but we got it done.

In 1995, we worked on an oil spill response project in the village of Chenega, off Prince William Sound. Part of the job was in the winter, and the next part in summer. We built the dock, a road, cleared trees, built a pad and put in water lines. It was instant gratification to look at all we accomplished. Working for Knik is that way – especially paving jobs. You spend an entire year building what's under that asphalt, then you pave it in a few days. Everyone sees only the top 2 inches, but you know what went into building that roadway. Years later you can look at it and say 'I did that.'

Can you tell us about your family and growing up years?
I have an adult stepdaughter from a previous marriage. She just moved to Idaho after graduating from high school. I grew up with four brothers in Soldotna. Most of my family moved down to Henderson, NV about 20 years ago, except for my dad who still lives in Alaska. He worked for BP for many years and just retired a few years ago. With five boys, we were put to work around the house – always had some project we were helping with.

When I was a kid, my family built a subdivision. I was hanging drywall at age 12 and digging ditches for culverts. We had a bunch of boys for free labor. My grandparents homesteaded in Soldotna in the early 1950s, so I grew up helping them build fence and bring in hay. I remember hiking down to the Kenai River and catching a fish with every cast.

I played baseball for awhile (third base and pitcher). My granddad taught me how to throw a curveball and a slider. He played in minor leagues in Texas in the 1930s. Once I got a car, I stopped playing and started working. I love cars. I had a 1974 Monte Carlo in high school. I bought a 1970 Camaro when I was in college and drove it up the Alcan to Alaska. At one point, I had a 1966 black-on-back Chevelle 4-speed with a 327 (engine). I am planning to attend the Barrett-Jackson car auction in January to see what I can find.

What was your first job?
My first job was working for my stepdad at a gravel pit. I learned my work ethic from him. I also worked in canneries, commercial fished a bit, worked at fast food and worked for the school district, doing the sound and light for the auditorium. I took anything that would pay.

What would surprise most people about you?
In 1984, I went to a specialty trade school in Southern California to learn computer programming. I graduated at the top of my class, but worked construction in Alaska in the summers and it paid more than an entry level job at Rockwell. I also disliked working indoors, so I abandoned that career. I am certified to program computer language like COBOL and Fortran. I was working with IBM mainframes, stacks of 16-inch disks and stacks of reel-to-reel tapes – all outdated stuff now.

I also like to cook and each year I host a New Year's Day brunch for 100 people at my cabin. I make Eggs Benedict and Bloody Mary's for all my friends their kids. I cook two prime ribs, two gigantic hams and use a couple hundred eggs to make the Eggs Ben. I have worked in bars before so I know how to mix drinks. I even worked the door at the Red Onion in Skagway at one point, checking ID and keeping an eye on things.

How do you spend your time outside of work? 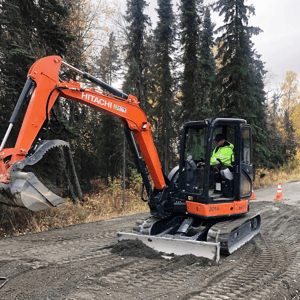 I read a lot of books, do a lot of day and night hiking and spend time on my snow machines. I used to have seven, but now am down to three. When you work for a company like Knik, you work a lot of hours and basically just eat and sleep while you are at a remote project site. When you are off in the winter, you have time to really relax. I used to put 5,000 miles on my snowmobiles each year, but the snow isn't as good as it was and now I may ride only 1,000 miles a year. All my friends have cabins in Caribou Hills so we have a big circle that rides. I have been riding with their kids since they were 5 years old, and now we ride with their grandkids. I used to drag them out of holes when they got stuck, and now they are dragging me out!

What do you like best about your job?
I like working for a company that really makes me feel appreciated for the work I do and also gives me an opportunity to try new things. This year, I will be running an asphalt plant for Knik which I am looking forward to. This is a new job for me and I will be learning a lot while getting paid to do it. I also like the team aspect of working with other employees for long periods. We travel to projects as a crew and live in camps together for sometimes months at a time. The project managers are not above jumping in to help us out, which is another aspect I like about working for Knik. The managers get out of their employees what they put into their employees. This summer, we were shorthanded and needed someone to shovel and rake to help the screed operator. One of our managers was happy to help out. No job is below anyone at Knik.