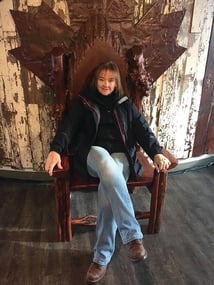 Bucket List Destination: I would love to orbit the earth, but would settle for Iceland.

How did you start your career at LTI, Inc.?
I started with LTI, Inc. when the company was split from Lynden Transport in 1983. I was honored to be able to work with (company patriarch) Hank Jansen for many years and have worked with four different presidents.

What is a typical day like for you?
I speak with and try to assist our drivers, mechanics and managers on a wide range of challenges they may have and hopefully provide the help or resources they may need.

What has been most challenging in your career?
Knowing that I can only provide so much, when I wish I could do more or say more in situations where words just aren't enough.

What are you most proud of in your career?
That I've never been late to work! I also have enjoyed getting people together for outings like a Driver Appreciation barbeque and water skiing at Wanapum Lake in Eastern Washington. I also organized a company ski trip to Big White, B.C., a booth at the Lynden fair to promote CDL driving and a driver exercise program that can be done anywhere.

Can you tell us about your family and growing up years?
I had the best family and childhood. We had so much fun. Growing up we spent summers water skiing at the lake, boating in the San Juans and fishing and razor clam digging in Westport, WA. Wintertime was sledding and snow skiing. My parents were the best.

What was your first job?
Working for my father as a dental assistant (not a career I wanted to follow!).

What would surprise most people about you?
I took a break one summer from college and went to Alaska (to make big money at a cannery!) and ended up living off the grid in Alaska for two years in an old homestead cabin without electricity or running water. It was a two-mile trek to get to the cabin, either walking, skiing or snowshoeing past the end of the road outside Homer. I went for the summer and ended up staying almost eight years. Absolutely loved Alaska. I would love to winter in a cabin in Montana.

How do you spend your time outside of work?
I have a funny little farm with an assortment of animals, both my own and wild ones that like to reside there. They keep me very busy and entertained. I'm down to a horse, a huge goat (complete with horns), cats, ducks, geese, opossum, muskrat raccoon and deer. The Canadian Geese come every spring and have their babies there. Each year I have between four and eight families born and raised until big enough to fly. They return in the fall for a week or so in their migration. I just picked two Golden Retriever puppies out last weekend, which will be old enough to come home the week after I retire.

What do you like best about your job?
Feeling like I really made someone's life a little easier.