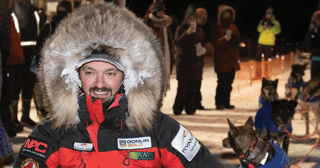 Pete Kaiser won the 41st running of the Kuskokwim 300 sled dog race in January. For the fifth time in six years, the Bethel local was crowned champion of what is called the toughest mid-distance mushing race in the world. Pete maintained a solid lead for the last leg of the race, so it was not a surprise when he pulled into the finish chute with his nine-dog team. Pete works for the Lynden family of companies, who are long-time sponsors of his racing career and Kaiser Racing Kennels in Bethel. At the finish line he was surrounded by family, friends and fans. "Lynden companies proudly sponsor Pete each year and his dedication and hard work are a true carryover from the job to the trail," says Knik President Dan Hall. Though the K300 is always competitive, Kaiser said that the field of elite mushers this year was especially fierce. "Dog teams are getting better and better and so are the drivers." Pete will be competing in the 2020 Iditarod which begins tomorrow, March 7, in Anchorage!