Earlier this year, Lynden Logistics helped bring a special piece of art honoring men and women killed in the wars in Iraq and Afghanistan to Honolulu. The Lost Heroes Art Quilt is traveling the United States and made a stop in Honolulu in July. The quilt pays homage to fallen American soldiers killed in Iraq and Afghanistan since Sept. 11, 2001. Created by artist Julie Chaleff Feingold, the quilt consists of squares honoring a fallen soldier from each of the 50 states who represents all of the soldiers who have lost their lives. In all, 82 military members are represented on the quilt with childhood photos and dates of service.

Army Corporal Kyle Ka’eo Fernandez is Hawaii’s soldier honored on the quilt. Hawaii’s Lost Heroes were honored and their families recognized at a ceremony held in the state capitol featuring several speakers including the artist and Lt. Governor James Aiona.

Lynden and its airline partner, American Airlines, donated the shipping of the quilt from Alexandria, VA, to Honolulu. Ken Hodges, Honolulu Operations Manager, attended the ceremony with District Manager Chris Palmer and Libby Lee-Hobbs of American Airlines. “It was very moving,” Ken says. “It was also an eye-opener for me because it makes you realize the true sacrifice these people make to defend their country.” For more information about the quilt, visit https://folkartmuseum.org/exhibitions/the-lost-heroes-art-quilt/ 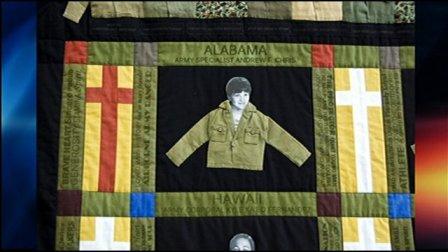