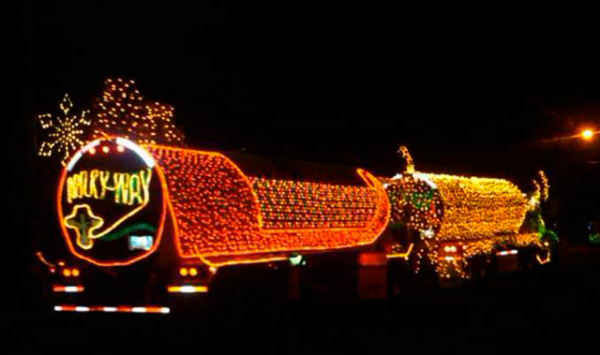 Going on its 23rd year, Sunnyside's Annual Lighted Farm Implement Parade is one of the top 10 lighted Christmas parades in the U.S.  LTI, Inc.’s Sunnyside crew entered a lighted truck for the first time in 10 years and took second place. Office Manager Barb Kluever offered a small prize for the design, and Mechanic Juan Romero and Wash Bay Attendant Luis Solis came up with a plan and prepared the truck for the parade.  Barb and her daughter Megan helped string 10,000 lights with the help of other volunteers. “We had the truck/float in four lighted parades throughout the valley,” Barb says. “The community was very excited to see it and we received many compliments. “ Juan purchased a Santa suit and drove the truck in the parade accompanied by Luis who was dressed as an elf.  “They were great with the kids and the community loved them,” Barb says. “I was very proud to be part of it.”