No. 27 makes the rounds in Alaska and Washington

Lynden's restored tractor and trailer that began Alcan service in 1954 has undergone a refresh and update in preparation for a busy travel season. Each year, the iconic tractor-trailer is part of community events and parades throughout Alaska and Washington. A museum showcasing Lynden's history is inside the trailer and is open for tours during the events. Chairman Jim Jansen is often at the wheel in addition to other Lynden drivers. Events include the Colony Days Parade in Palmer, Alaska, the Golden Days Parade in Fairbanks, and the Alaska Trucking Association's Truck Driving Championships in Anchorage, as well as many others. Keep your eye out for No. 27 this summer and check out the museum! 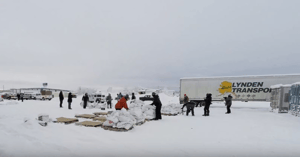 Lynden continued its tradition of donating transportation of food and supplies for the 2018 Yukon Quest 1,000-mile sled dog race this winter by participating in the annual Fairbanks Food Drop event in January. Alaska West Express Drivers Brian Ambrose and James Elliott picked up freight in Whitehorse to support the mushers and their dog teams. Lynden Transport is also an event sponsor. Canadian Lynden Transport Dispatcher Deanna Benson received a call from race organizer Alex Olesen one day. "He said his uncle was curious about how things were going with the shipment," Deanna says. "The uncle turned out to be Lynden retiree Steven Reilly. What a small world!" Image from the Yukon Quest video. View the video and the food drop process at https://youtu.be/t5ijcCWoTvk?t=45.

Lynden Transport Account Manager Dennis Flajole (right) and Brown Line Sales Manager Steve McQueary spoke to students at the University of Washington in December as part of an annual transportation seminar hosted by the Washington Agriculture and Forestry Education Foundation. It was Dennis' third year as a speaker at the seminar which Lynden customer Darigold sponsors each year. "The presentation was an excellent overview of the diversity of your organization and how important transportation is to both state and regional economies," writes Deborah Moore, Program Director for the foundation. "After the presentation the students had questions about issues we're facing in the industry," Dennis says, "but they were more impressed with the services we provide and the amazing places we provide them. Every year I have students express interest in working for Lynden. This year two people asked me for contact information and said they wanted to work for us in Alaska." 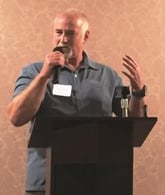 Alaska Marine Lines was honored as a 2017 Philanthropic Business of the Year by the Juneau Community Foundation this fall. Alaska Marine Lines has donated shipping services and financial assistance to Juneau charities for many years. The award was presented to Alaska Marine Lines President Kevin Anderson at the annual awards dinner in recognition for transportation services donated to the Juneau Housing First Collaborative project in Lemon Creek. The project is a 32-unit apartment facility for some of Juneau's most vulnerable residents. The building is monitored by social services staff that support the residents with behavioral health services, medical services, food, laundry, and a small library/learning center. "Alaska Marine Lines is grateful to the community of Juneau and the JCF. We are proud to continue our long history of providing essential transportation services to the region, and we are humbled by the award and recognition," Kevin says.

LTI, Inc. Director of HSSE & Compliance Anthony Knapp was in Albany, OR at the annual Veterans Day parade Nov. 11 and rode with Driver Trainer/Backup Supervisor Andrew Ruzanski in the Milky Way tanker on the parade route. "It was an honor to represent LTI, Inc. in the parade, and the Lynden Tank team should be proud of the tanks they build. I know I was," Anthony says. The Albany parade is rumored to be the largest veteran's parade west of the Mississippi. That's Andrew's daughter Maddyx proudly watching her dad Andrew behind the wheel. Anthony is a 20-year veteran of the U.S. Coast Guard and Air National Guard.

Alaska Marine Lines stepped in to help the Bristol Bay Historical Society move a 1932 sailboat from Anchorage to Naknek for display in the Bristol Bay museum. The 26-foot by 9-foot fully restored wooden vessel was used for salmon fishing more than 80 years ago. It still has the bright orange streak identifying it as cannery boat. The Anchorage Museum did the restoration work on Koggiung #5. It was scheduled to go into permanent storage there when Fred Anderson of the Bristol Bay Historical Society heard about it and decided to bring it home to his museum. It will join an older wooden sailboat in a collection there with plans to create an entire display of historic wooden fishing vessels. It took about two years of negotiations and planning to move the boat, but with Alaska Marine Lines' donation of barge transport, it is now back in its native waters and ready for all to enjoy.

Over land, air or sea, Lynden companies help the Girl Scouts of Alaska transport thousands of pounds of cookies each year for its annual fundraiser. "We have been helping the Girl Scouts for about 20 years. It's a large undertaking but we have honed it down to a fine art," says Customer Service Manager Cindi Thomas in Anchorage. Cindi is responsible for keeping track of the paperwork each year for the multiple shipments coming into Anchorage. This year, five trailer loads of cookies were shipped from Fife, WA to Anchorage on TOTE. From there, Lynden employees take over, receiving orders from Girl Scout contacts to count each case of cookies, sort, palletize and deliver them to various locations. "This year we ended up restacking more than 300 pallets to 10 different Alaska locations," Cindi explains. "Lynden companies are essential links in our supply chain," says Rae Ratliff of Girl Scouts of Alaska. "We send a huge thank you for donating the safe delivery and transport of cookies to Alaska."

Alaska Marine Lines Marine Maintenance Manager David Byrne first got the call from Steven Sparks at the Port of Bremerton. "He saw the Kuskokwim Trader anchored over at Sinclair Inlet near Gorst and came up with the idea to use it as a stand-in for the larger ship," he says. "At 300 feet long, the barge isn't as long as the 418-foot destroyer, so Western Towboat towed it to a spot further away from the bank where it would work just as well."

The barge did its job protecting the northern end of the marina from January through Feb. 28 when the Turner Joy returned to the harbor, towed by Western Towboat.

"When port staff called Alaska Marine Lines for help, David Byrne was very accommodating and acted quickly to help the Port and Historic Ships Association in resolving the issue by providing us with the Kuskokwim Trader.

The Kuskokwim will soon be towed to Western Alaska loaded with cargo for the annual fish season in Bristol Bay. "It was a great fit for the 35-year-old barge," David says, "and we were happy we could help out the Port of Bremerton." 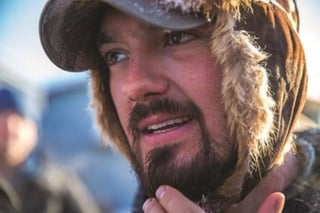 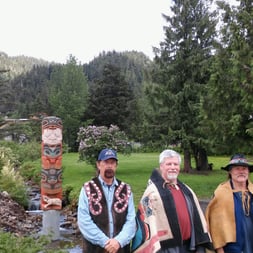 Alaska Marine Lines and LTI, Inc. donated the transportation of a ceremonial totem pole from Bellingham, WA to Hoonah, AK for a June 4 dedication in the Tlingit village. Carved by Scott Jensen, Jeff Skaflestad and Fred Fulmer at Jensen's Bellingham studio, the totem was requested by elders of the Chookaneidee Clan to replace an ancestral totem pole that, according to legend, served as a source of wisdom, protection and direction for the clan's shaman when the clan was located at Glacier Bay, AK.

The advance of the "Little Ice Age" between 1300-1870 drove the Tlingit out of Glacier Bay. The pole remained and was eventually enveloped in ice.  "After Glacier Bay was designated a national park, the clan was not allowed to return to their homeland," explains Master Carver Scott Jensen. "The clan relocated in Hoonah and, years later, the totem reappeared in the creek there.  Although the pole is now gone, the clan elders have wanted to replace it for generations."

Skaflestad relocated from Hoonah to Bellingham and Fulmer from Juneau to help Jensen carve the totem in his studio. After five months of work, the totem was finished and ready to begin its journey to Hoonah. Jensen called Lynden for help.

The Alaska Marine Lines team arrived at Jensen's Bellingham studio in May to pick up the 11-foot, 2,000-pound totem, which is considered both a clan and shaman pole. The crated totem pole was secured on a trailer for the ride to Lynden, WA where LTI, Inc.'s Tom Rainey used a forklift to carefully place it into a container for the ride to Seattle and transfer onto the barge for the journey to Southeast Alaska. In Petersburg, AK, the pole was transferred barge to barge for the final leg to Hoonah. "As a company serving Alaska for over 60 years, Lynden is proud to provide the transportation to bring this important ancestral piece back to Hoonah," says Executive Vice President Alex McKallor. 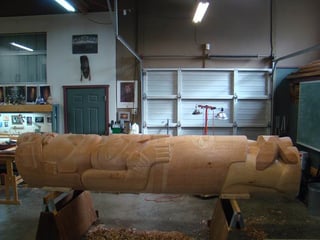 Although the elders who requested the new totem passed away before the dedication in June, the carvers say the ceremony was very moving. "We felt the presence of our ancestors," says Skaflestad who is part Tlingit. "There were many tears as we placed the totem pole in its ceremonial location in the creek. It was a proud moment of unification for all of us."

"We feel very blessed to have Lynden's support in this project," Jensen says. "Each member of the Lynden team took great care in making sure the totem was safe and secure along its journey."